In the latest update by “Snowy Tan” fanpage, one of the two missing cats, Ben Ben had passed away on Wednesday morning (27 March).

The two felines named Ben Ben and Leng Leng had been taken away by the Marine Parade Town Council (MPTC) from their home and dumped miles away at the Seah Im Food Center Harbourfront on 8 March (Friday), “with no easy access to food and with dangerously high traffic”.

Ben Ben’s caregiver mourned her loss of her dearly beloved pet with the devastating news on Facebook (Snowy Tan) and continues to search for Leng Leng, despite having scoured the surrounding vicinity of HarbourFront for days on end. According to her post, local folks informed them that cats who were dumped at Harbourfront usually “went missing and likely dead”.

“Why did MPTC remove cats and dump them at such highly unsafe place? Isn’t this cruelty? Why is there no collaboration by Marine Parade Town Council with Cat Welfare Society and the area caregivers to secure positive outcome for the cats and solve community problem? Why Why Why???” Snowy Tan queried rhetorically in the heartrending post. The heartbreaking pictures of Ben Ben found lifeless by the side of the road was shared on Facebook by Cats of Marine Terrace, a page created to help Madam Tan care for the community cats in Marine Terrace, an HDB neighbourhood in Singapore. An MPTC representative apologized on behalf of their staff’s “misjudgement” in relocating the cats instead of handing them over to Agri-Food Veterinary Authority of Singapore (AVA). However, they also justified the issue by stating that they have been “working very closely with the Cat Welfare Society (CWS)” and “received more than 45 feedback since 2016 from residents” of nuisances from the 15 cats that roam freely within Blk 15 Marine Terrace.

They also stated that they have attempted to educate Madam Tan on “responsible pet ownership” over the past years and advise her “against keeping so many cats in her HDB flat, and not to allow the cats to roam freely at the common areas of the block”.

Unfortunately, MPTC’s response did not appease the public and they displayed it through their disgruntled reactions on the aforementioned Facebook posts.

Joanne Cheong, a self-proclaimed “cat mama”, “catographer”, and “video sculptor”, tagged several profiles of politicians and public figures as well as the MPs of Marine Parade GRC before asking them if relocating community cats to balance the needs of residents should come at the expense of the cats’ lives. “What can the town council do to prevent such tragedy from happening again. We will like a response. Thank you,” she wrote at the end. Although her comment went unanswered by MPTC, many Facebook users were in support of her comment, such as by 司徒凱文 who claimed the town council neglect their cleaning duties; Peggy Loh who suggested that the MPs’ relocated instead; and Lisa Brown who backed Peggy’s comment by stating: “More precisely terminate and replace them!”

In another comment, SuDi Kaffrowi remarked on the DOUBLE STANDARD of the town council in which their convenient “relocate/relocation” would be labelled as “abandonment” if residents do the “same heartless stupeed deed”. Jill Hum replied to this by saying that MPTC is trying to be clever (“Kay kiang”) to “earn brownie points” without realizing “their actions caused way more harm than good cause they don’t have common sense or gray matter!” 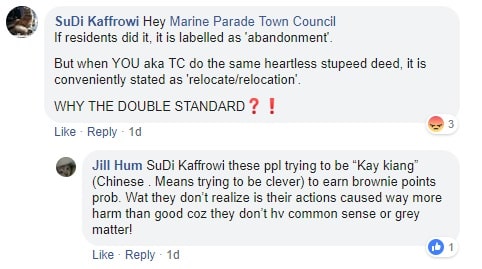 Nevertheless, not everyone agreed with the opinion that MPTC was to be entirely blamed. Lemon Law, who lives in Hong Kong, responded to Joanne Cheong’s comment by stating that Madam Tan should have adhered to the town council’s past advice “to safely confine her cats INDOORS”. He blamed Madam Tan for the loss of her cat’s life and called her “a st*p*d irresponsible cat owner”.

Most of the comments made regarding this issue were strongly against MPTC’s actions. A frustrated cat lover, Tiffany Heng, believed that MPTC’s “sorry” is not “sincere or genuine… lacks any remorse and is a merely empty word”. She noted how no disciplinary action was taken against the employee involved and that MPTC was not transparent in is closing the whereabouts of the relocated cats, proving their guilt in the matter.

She concluded with “MPTC was “sorry” that Ben Ben died but it was not sorry for its woeful action in relocating the cats to a place where death is almost certain. MPTC, save your “sorry”. Say it only when you mean it. Say sorry that your action led to Ben Ben’s death.”