Collection of quotes by Dr Chia Thye Poh, the longest political prisoner in the world

A collection of quotes by Dr Chia Thye Poh, a physicist and past Member of Parliament who was detained without trial by late Lee Kuan Yew’s Singapore government for 32 years.

Parliamentary Debates, 19 September 1964, following the “race riots” in Singapore: “Sir, when the Prime Minister talks of defending our country, we find it hollow…This Government is oppressing the people; more than 200 political leaders and trade unionists are in the jails of Singapore… Political dwarfs like Mr. Lee Kuan Yew can strut around and talk big… All this nonsense [with] these riots is just to hide the truth that the main culprits belong to the ruling parties.”

On being demanded by authorities that he publicly confess to being a violence-oriented communist, Dr Chia replied, “To renounce violence is to imply you advocated violence before. If I had signed that statement I would not have lived in peace.”

“[Signing a false statement] would have been against my conscience. I wouldn’t have been able to live in peace with myself.”

“If the government had the evidence, it should have tried me in open court.”

After being released in November 1998: “The ISA is a law that tramples on human dignity and strikes fear into the mind of the people.”

In 1989, he said, “Under the PAP rule, there is no genuine parliamentary democracy… there is always the danger of one-party rule slipping into one-man rule, and worse still, into dynastic rule. The PAP government does not like critical newspapers or publications, and is intolerant towards sharp criticisms. They seem elitist and arrogant, regarding themselves as the best and the most suitable to rule Singapore. And they rule it with iron-handed policies.”

On detention and determination: “My ideal has not been dampened after [more than thirty] years under detention. In fact, prison life can only make a person more determined to fight against oppression and for a fair, just and democratic society.”

Reflecting his peaceful nature, Dr. Chia insists he bears “no personal grudge against anyone” (including his tormentors).

“The struggle for democracy is much more than personal battles. Democracy is not about violence.” 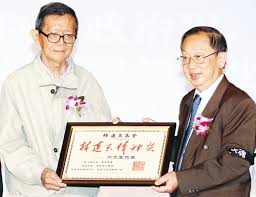 Upon being awarded the Lim Lian Geok Spirit Award, the highest honour in the Malaysian Chinese community: “A university is not an ivory tower… what matters is its spirit, its capacity in bringing up graduates that empathize with the people and work for the progress of mankind and world peace… Just as Mr. Lim Lian Geok had said, his body might be destroyed, yet his spirit would survive and flourish. [That spirit] will always live in the heart of the people. It will always inspire us to overcome all difficulties and march on.”

“Get out of your comfort zone. Wake up the sleeping giant in you.”