Amid a more challenging global environment, Singapore’s economy expanded 2.1% in the second quarter, missing forecasts of 2.2% growth. The Ministry of Trade and Industry (MTI) has also narrowed down the country’s 2016 GDP forecast to 1-2 % from 1-3 % previously.

The discount has taken into consideration additional downside risks including Brexit, potential spiking credit defaults in China and rising domestic corporate credit levels amid a broad-base economic slowdown across the region.

The benchmark Straits Times Index opened lower on Thursday, but erased some losses in the afternoon trading session. SembCorp Marine (+5.4%), SingTel (+1.7%) and SATS (1.7%) were among the top performers.

Singapore’s largest telecommunication service provider, SingTel, has announced a largely unchanged net profit for its June quarter as compared to a year ago. Earnings per share were up slightly by 0.3% to 5.93 cents, a bit below market expectations.

Its share price jumped as much as 3.0% to $4.33 yesterday after the earnings release. With about 15% year-to-date share price gain, it has far outperformed the index because of its defensive nature and stable dividend.

The Reserve bank of New Zealand cut its official cash rate by 25bps to 2.0% on Thursday, and will continue to adopt accommodative monetary policy to ensure that future inflation stays within the target range. This rate cut was widely expected, as the futures market had priced-in a 100% probability of rate cut ahead of the meeting.

The kiwi dollar, however, soared as much as 140 pips to 0.7346 against USD right after the announcement, before coming off to the 0.7240 area on Thursday. 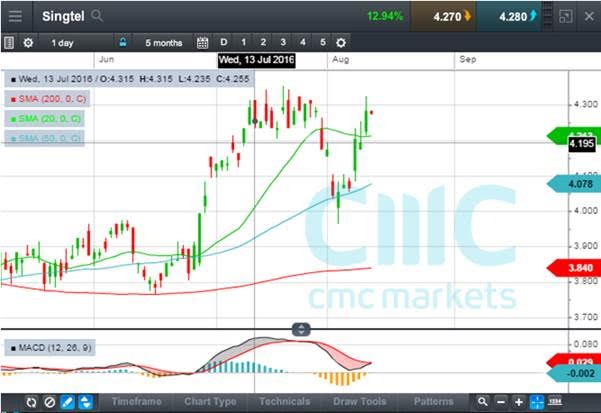