By Margaret Yang, CMC Markets
With several major political and economic events dominating market movements, traders are positioning themselves for rising volatility this Thursday and Friday. The three major events on 8th and 9th June are:

The UK election result will give direction to sterling and the future Brexit talks. Recent terror attacks in Manchester and London have led to criticism over the government’s ant-terrorism measures, challenging Theresa May’s leadership. The turmoil resulted in a pause in election campaigning and rising uncertainty over the expected election result. GBP/EUR has been trending down since early May, as has the gap between the ruling Conservative party and the opposition Labour party.
‘Risk-off’ sentiment is likely to prevail as any surprises from the UK election, the ECB’s policy outlook or changes in the White House could significantly impact the market. This has led to a hunt for safety, with gold, silver and the Japanese yen advancing to their highest levels in a month.
The gold price broke out above the key resistance level of US$1,283. Its immediate psychological resistance level is US$1,300. Breaking out above $1,300 would open the door for more upside toward the next major Fibonacci level at $1,337. On the other hand, the momentum indicator RSI has jumped to over 70%, indicating it is overbought in the short term.
The crude oil price rebounded overnight due to short covering activities ahead of tonight’s US DoE crude inventory data. The market expects an inventory drop of some 3.5 million barrels, according to Reuters.
Gold 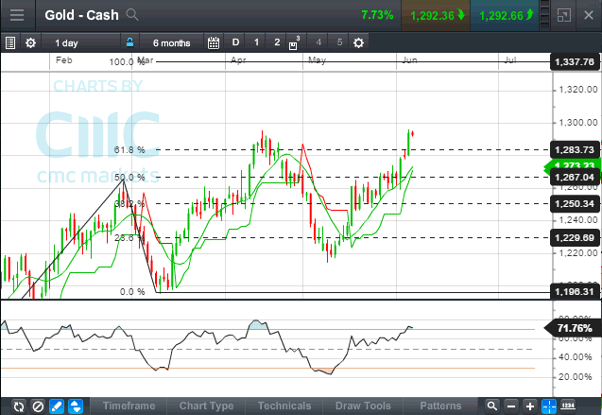