US non-farm payroll employment increased by 255k last month, beating the market consensus of 180k. Two consecutive months of robust jobs growth has led the market to believe that we are getting closer to a Fed rate hike this year.

The US dollar index rose over 0.5% overnight, indicating a stronger US dollar against its major peers. US equity markets also closed higher on strong jobs creation and wage growth.

DBS, Singapore’s largest bank, announced its 2Q earning results early this morning. Its 2Q net profit was 6% lower due to a S$150 million net allowance charged for the bank’s exposure to the Swiber group after drawing S$ 250 million from general allowance reserves. The bank’s non-performing loan ratio increased to 1.1% from 1.0% a quarter ago.

Its share price has fallen sharply recently because its $700 million exposure to Swiber Holding has deepened the market’s concern’s over its total S$23 billion exposure to the oil & gas sector. Besides its 2Q earnings, investors would also like to know how the bank plans to adjust its provisions in order to cover the souring loans in the headwind of an oil & gas downturn.

China will announce its trade balance, including import and export data for the month of July this morning. The forecasted trade surplus of $47.6 Billion is slightly lower than the previous month’s actual number of 48.11 billion. Exports and imports are expected to decline in dollar terms from last year.  The 7% depreciation of CNH against USD over the last 12 months would have provided some support to the country’s export sector. 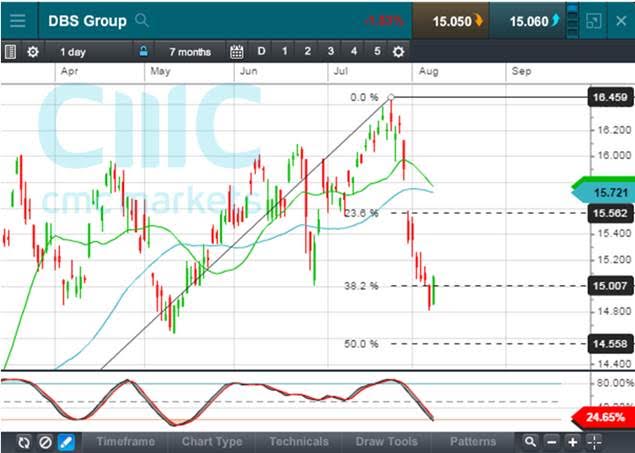