By Margaret Yang, CMC Markets
More USD/JPY volatility is ahead of us. According to Bloomberg news last Friday, the Bank of Japan (BOJ) will consider introducing negative lending rates on some loans in order to stimulate the economy in the upcoming BOJ meeting this week. USD/JPY rallied over 1% to 110.50 after this news was released. Other expectations, including a deeper cut to the current negative deposit rates, and expanding the asset purchase program, were also discussed among market participants.
This comes against the backdrop of negative deposit rates launched early this year, which did little to help spur lending activities. Since the sub-zero rate became effective early this year, banks’ profit margins from lending to highly rated companies have dropped to their lowest level in almost a decade. The BOJ’s quarterly survey also showed that demand for credit from large, medium and small-size firms all dropped.
Officials said that adding this to the central banks’ arsenal could have a positive impact on the economy. However, this will further squeeze the commercial lender’s margin, which has already been penalized by existing negative deposit rates.
USD/JPY rallied over 2% to 111.79 on last Friday. Nikkei futures soared to 17,730 during US trading hours. Expectations are gradually building up and being priced-in. Any surprises from the BOJ meeting could dampen market’s enthusiasm and magnify the volatility.
USD/JPY 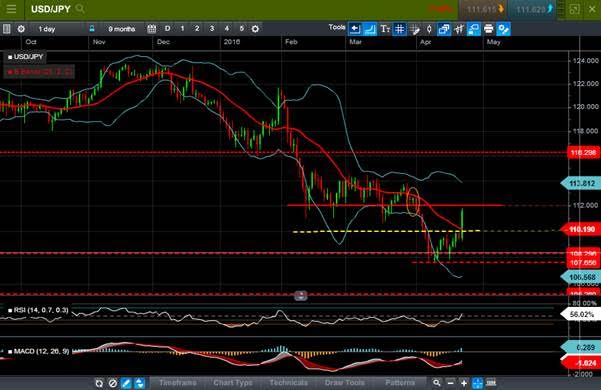