Last night’s Lianhe Wanbao on 19 April featured the Singapore Democratic Party (SDP) chief Dr Chee Soon Juan on the front page of its publication, together with the People’s Action Party’s Murali Pillai, who will also be contesting in the Bukit Batok by- election.
However, Dr Chee criticised the media outlet’s portrayal of him as compared to Mr Murali. Lianhe Wanbao had chosen two very different photographs of Mr Murali and Dr Chee, with a picture of the former smiling and posing for the camera, while Dr Chee was pictured with what netizens called a “grumpy” face.

Dr Chee took to his Facebook the day after Lianhe Wanbao’s publication, expressing his disappointment in the “two very contrasting pictures” of him and Mr Murali.
“Through the decades l’ve often been portrayed in a less-than-favourable manner (to put it mildly) whenever it comes to presenting me face-to-face with my opponents,” Dr Chee noted in his Facebook post.
He then appealed to mainstream media outlets and called for editors and Singapore Press Holdings (SPH) and Mediacorp to be fair in their portrayals of him and Mr Murali, especially in the upcoming by-election.
In response to his Facebook post, netizens were also quick to realise the stark difference in the photographs used. 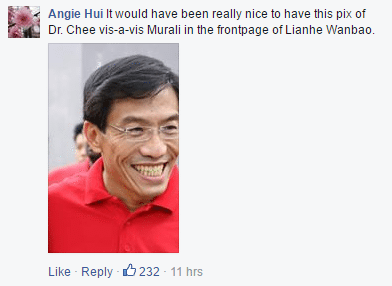 Nevertheless, some other netizens saw the photograph used in a good light, saying that it portrayed Dr Chee as a mature and upright candidate
Dr Chee expressed that he considered Mr Murali a “worthy opponent” in the by-election.
“l hope that Bukit Batok voters will get to see a fair representation of the both of us before they choose which person they want to be their MP,” Dr Chee wrote.