Member of Parliament (MP) for Sengkang Group Representative Constituency (GRC), Jamus Lim has said in his cut during the Ministry of Education (MOE) Committee of Supply debate in Parliament Wed (3 March) that Singapore “currently has one of the highest average class sizes among advanced countries”.

In response to the Workers’ Party (WP) MP’s remark, Minister for Education, Lawrence Wong said that it would be “more relevant to compare our teacher numbers with our student enrolment numbers”.

Mr Wong went on to say that Singapore’s teacher-student ratios are “comparable” to the averages for the Organisation for Economic Co-operation and Development (OECD), referencing the MPs’ comparison of Singapore’s relatively larger class sizes against the OECD standard sizes going further to say that he hoped that MPs “understand that it is not that we have fewer teachers as compared to the OECD countries” but that teachers are placed in classes where they can “maximise their impact” such as in the earliest grade levels or where students have greater needs.

In addition, Mr Wong also said that Singapore devoted a larger share of our teachers’ time to activities that are crucial for a student’s “holistic development”, citing CCAs, lesson preparation and professional development as examples.

Commenting on a Mothership article carrying the story, DJ Jade Rasif opened up about her experience in a local school, saying she really struggled in a class of 40 with her dyslexia, admitting that she was “failing constantly” and that it was not till her mother transferred her to St Joseph’s Institute International School (SJII) where she received “1 on 1” attention that she drastically improved.

She even said that she never needed tuition because if anyone “didn’t understand something, the teachers had the time to give us the extra attention”. At SJII, they “had longer school hours” and “were never forced to do CCAs”. “School started later as well, so we got more sleep”

Ms Rasif then compared this experience at SJII to when she went back to local school for junior college where she “felt overworked, stressed and burnt out” because “it was definitely more stressful and tedious wasting time preparing for national competitions at the CCA level, and trying to juggle a leadership position.”

Ms Rasif further pointed out the success that her peers in SJII “(who never had tuition)” were “well adjusted, and most work in law, medicine and finance.” She ended off by saying that she had “so much respect for SJII’s model of education” and hoped that “reducing class sizes, reducing CCA burdens and having later start times is something we can sincerely commit to as a country.” 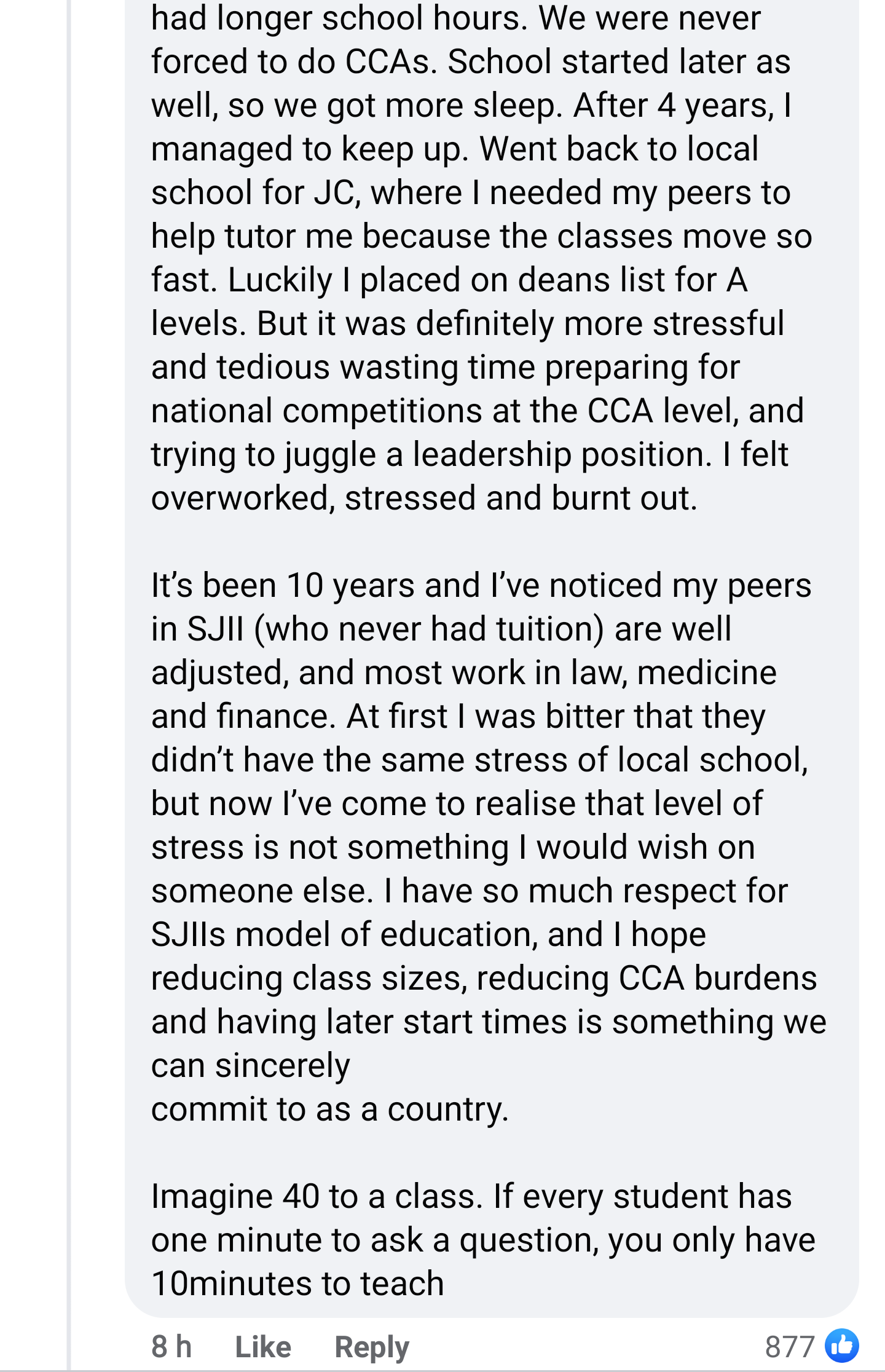 After all, if there are 40 to a class and every student had one minute to ask a question, there would only be “10 minutes to teach“.

When one person in the comments replied to say that Ms Rasif’s comparison of her own experience to the average Singaporean student is not balanced since she faces specific learning challenges, she responded that given how much she benefitted from a smaller class size, imagine what an average student might achieve with that same opportunity.

In the same thread, a couple of people agreed with Ms Rasif that a smaller class size would benefit students and that it was time for a change in the local education system.

One person in particular pointed out the how children from lower socio-economic backgrounds are disadvantaged by not having access to a global, elite education such as those provided in international schools, which are very expensive. 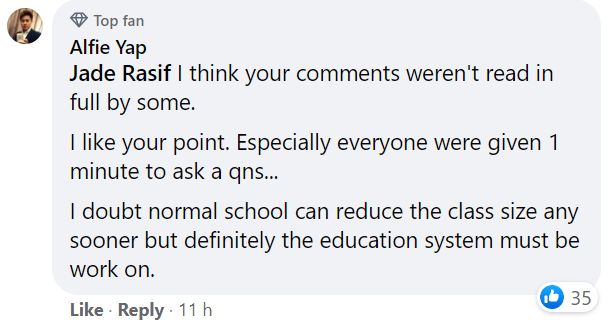 One netizen in particular also pointed out the high cost of living in Singapore that means many parents are unable to afford to send their children to private or international schools where class sizes are smaller. He noted that it is a “multi-facet[ed]” problem, and hope that the government would ‘overhaul’ the system. However, several people asserted that it would be too costly for public schools to reduce class sizes as it would require not only more teachers, but also more infrastructure and learning resources. This, they said, would mean that public schools might become too unaffordable, especially for low-income families. 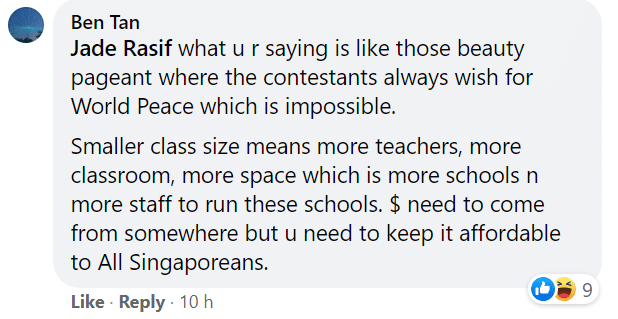