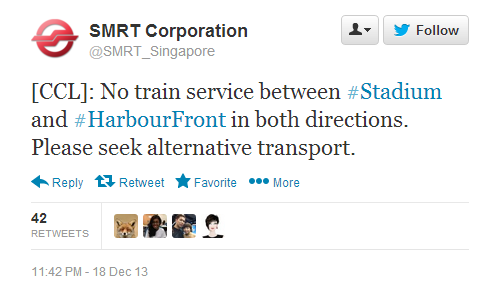 Train services between Stadium and HarbourFront MRT stations on the Circle Line were disrupted at 11.21pm on Wednesday because of a power trip failure.

Preliminary investigations revealed that the power trip was caused by a cable which was damaged by a contractor from the Land Transport Authority during the power cable replacement exercise.

The morning following the incident, SMRT said that in order to ensure the passenger safety, those on board were detrained to the emergency walkways at Caldecott and Tai Seng MRT stations.

Free bus services and bus bridging services were activated within 20 minutes between Mountbatten and HarbourFront MRT stations and terminated at 12.30am after end of operation hours.

SMRT engineers were deployed on site to restore traction power to the rest of the network and had the power restored at 4am.