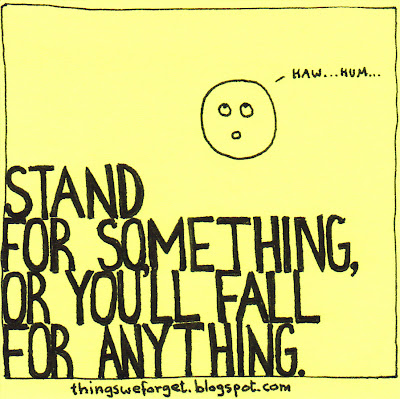 When the recession hit us last year, the worldwide economic landscape was dire indeed. Singapore, being an open economy, was the first Asian country to go into recession – with more than 100,000 people losing their jobs. Government officials and Members of Parliament warned of tougher times ahead, and ordinary Singaporeans were unsure of what the future held.

In a little corner of this island, however, one person was wondering if he could do anything to lift the spirits of Singaporeans. He came up with a simple idea – little yellow coloured post-its or notes with words of encouragement placed in public areas. For the last 525 days, he has been placing these notes around town and in HDB heartlands, one per day.

“Don’t follow your dreams, chase them”, Don’t look down on somebody unless you’re helping him up”, “Stand for something or you’ll fall for anything”, “Rise determined, sleep satisfied”, “Anger is one letter short of danger”, “Don’t confuse money with wealth”, are some of the messages on the posters.

His blog, aptly named, “Things We Forget”, keeps an archive of his works.

In an interview with The Online Citizen, the person, who wishes to remain anonymous, says, “I wanted to do something that would remind me and those around me that a positive attitude is permanent and troubles are temporary.”

With almost 22,000 fans on his Facebook page at the time of this writing, clearly his works have touched quite a few people. “I once got an email from a girl who said she’d decided to give her boyfriend another chance because of one of the notes,” he says. “Another lady wrote saying that my notes helped her come to terms with the loss of a limb.”

It may be a small thing to do but it may just make the world a little better, he hopes.

He plans to have these words of encouragement printed on calendars, t-shirts and he is also contemplating an iPhone application.

So, the next time you come across one of these notes, hopefully it’ll remind you of some of the things which you may have forgotten.

Here is TOC’s interview with the person behind the notes.

How did the idea come about? 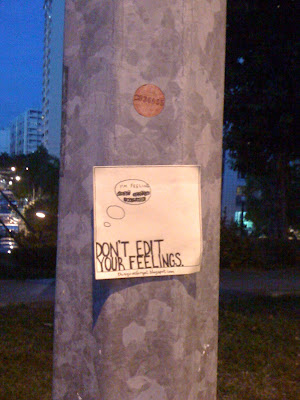 I thought of the idea bang in the middle of the recession last year when the general mood was one of pessimism and despair. I wanted to do something that would remind me and those around me that a positive attitude is permanent and troubles are temporary.

Where do you derive your inspiration for the words?

I’m inspired by the things that happen to me each day. The notes are as much a reminder to myself as to others. I’m also inspired by what’s going on in the world, by things i read and hear.

How long have you been doing this?

What do you hope this will achieve?

I hope they will make me, those that read the notes and the world slightly better.

What keeps u going?

A lot of people write me emails or leave comments to the notes or on the Facebook page saying that the notes help them on a daily basis, that they have made their lives a little brighter or made their thoughts a bit more positive. That’s what keeps me going. 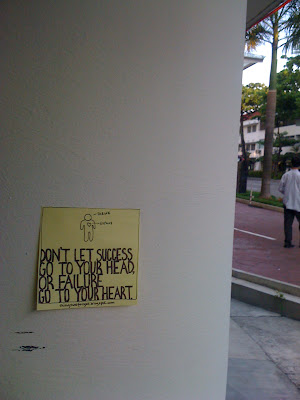 What do people think of these notes that you do?

All the quotes are positive, is there a particular reason?

I see that you post these little notes in various areas around Singapore. How do you choose where to put up the post-its?

I choose the places at random. I usually leave them wherever I happen to be once that day’s note is ready.

Have you received any complaints about the notes?

Are there any particular incidents with the notes you’d like to share? Perhaps, someone was inspired to do something he otherwise might not have, after reading your notes?

Yeah, I once got an email from a girl who said she’d decided to give her boyfriend another chance because of one of the notes. Another lady wrote saying that my notes helped her come to terms with the loss of a limb.

Do you do this alone or is there someone helping you with this? 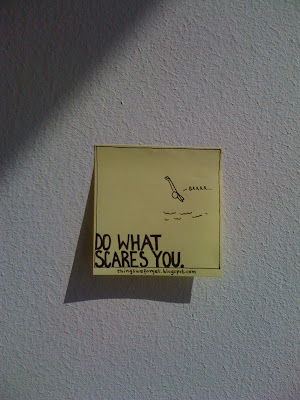 Are you planning to have these sayings or words of wisdom printed on t-shirts, greeting cards, mugs, etc?

I feel very blessed and lucky that so many people like what I do. I’m grateful for their love and support each day.

Which saying is your personal favourite?

What is your own motto in life?

Do what you can, with what you have, where you are.

Lastly, may we know your age and name?

Ha ha, I’d rather have the attention focused on the TWF notes.