Rockets from Batam, statistics and MHA

While it is commendable that the Ministry of Home Affairs (MHA) publishes periodic terrorism threat assessment reports and summarises the number of detentions and releases under the Internal Security Act (ISA), more details and accuracy of information would be appreciated.

One incident that the Singapore government seems to be obsessed with is the alleged rocket plot aimed at Marina Bay Sands in August 2016. I have read repeated reports on this alleged incident in the mainstream media even though the district court in Jakarta had ruled in 2017 that such a plot did not exist. The verdict was covered by Channel News Asia with AFP as its source. The opening paragraph of the report reads: “Six Indonesian militants were jailed Wednesday for harbouring two Uighurs who entered the country to fight with extremists linked to the Islamic State (IS) group, but were cleared of plotting to fire a rocket at Singapore.”

While the Straits Times report was waffling with a misleading headline “Batam militants behind foiled Marina Bay plot jailed for terrorism conspiracy”, it too was clear that the alleged rocket plot was not proven. Indeed, when the six people were arrested, no rocket was found.

Despite the verdict of the Jakarta court, why does the government continue to mislead the public that there was a rocket plot against Singapore in 2016? In the latest 2019 terrorism assessment report, it again reminded Singaporeans of this alleged incident in paragraph 14:

“Even though there is no credible intelligence, for now, of an attack being planned against Singapore, we cannot rule out the possibility. After all, Singapore was targeted in 2016 by two ISIS-linked plots.”

Singaporeans are fully aware and prepared that terrorists can strike us any time. It has happened to other countries, including our neighbours and there is no reason why it cannot happen to us. A single truck driven at full speed into crowded Orchard Road will result in deaths and bloodshed. There is no necessity to resurrect an alleged incident which has already been proven to be unsubstantiated in a court of law to add to the reality of the world today.

Paragraph 14 is not only baseless, it disrespects the verdict of the Jakarta court. It is telling Indonesia that we will disregard the verdict and will continue to use the alleged incident to instill fear of a terrorist attack in the minds of Singaporeans.

This is exceedingly troubling. While it benefits the government to use the threat of terrorism as a reason to retain the ISA and enforce laws that remove more fundamental rights of Singaporeans as well as to enact new and oppressive laws, it does not help to foster good relationship with our neighbours.

Singapore prides itself as having an independent judiciary. Anyone who remotely criticises the judiciary is hauled before the courts under the dreadful Administration of Justice (Protection) Act. Shouldn’t we respect the judiciary of Indonesia by accepting its verdict even if this alleged incident of a rocket plot can no longer be used to instill fear in Singaporeans?

While I appreciate the data given in Annex A (see screenshot) of the 2019 Report, I regret that it is incomplete and selective.

The table shows that between 2015 and 2018 there were 8 persons who were issued with restriction orders and 14 served with detention orders.

Under the ISA regime, an arrested person is detained for 48 hours and another 28 days for investigation. Just before the expiry of 30 days, he can be released without conditions or issued with a restriction order or served with a detention order.

Annex A does not tell us how many people were arrested, detained and interrogated for 30 days without charge and then released or deported without restriction orders.

In 2015, at least 27 Bangladeshis were arrested and deported, presumably without restriction orders while another six were subsequently charged under the Terrorism (Suppression of Financing) Act for providing or collecting S$1,360.

These cases are important and should be included in Annex A. 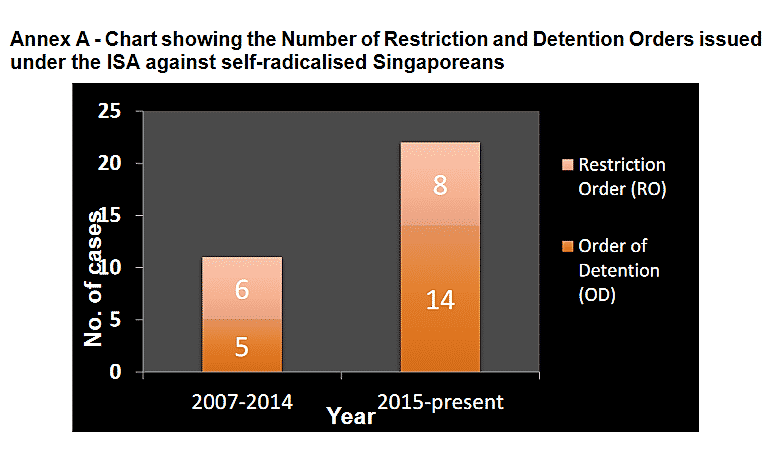 Repatriation of foreign workers without a right to be heard or represented by lawyers is a breach of natural justice and international labour norms. These workers pay huge sums of money in order to work in Singapore. To be repatriated after spending 30 days in cold rooms without the knowledge of their families and then finding themselves expelled to their homeland penniless is not how a developed country like Singapore which is also a member of the International Labour Organisation should behave. Surely, the injustice done to these workers deserves an explanation in the ministry’s report.

Interestingly, paragraph 22 of the report mentioned the repatriation of 14 Indonesian domestic workers and three Malaysian work permit holders. Were these workers also subjected to the same treatment as the Bangladeshis?
I hope the ministry will clarify and report fully in its submission to the next Universal Periodic Review.