In a Parliamentary speech yesterday (14 May), the new Trade and Industry Minister Chan Chun Sing said that Singapore’s future success is limited only by the scale of its ambitions and drive (‘What Singapore needs to do to remain effective and attractive‘, 15 May).

This means Singaporeans must have an ability to understand and work across cultures and nationalities, he said. In addition, Singapore must also have a diversity of talent, both local and global, he added.

He then spelt out a vision of foreign professionals with valuable knowledge, skill sets and competencies working shoulder-to-shoulder with skilled Singaporean talent, “cross-pollinating ideas and bringing out the best in each other”.

Chan also warned that as a society matures, it usually becomes more conservative – choosing to uphold the existing systems rather than break new ground.

But to be “pioneers of our generation”, Singapore must be clear-eyed about its challenges, he said. “We need to keep up our vitality and verve. It is one thing to be the best-in-class for ports and airports. But it is another to be even better – ready for tomorrow’s needs, ahead of time,” he added.

Nothing wrong to have talented foreigners

It’s not wrong for Chan to say that Singapore must have a diversity of talent, both local and foreign, to help propel the country forward.

Certainly, we can see many such examples in America, where talented foreigners came and helped America prosper and in the process creating many jobs for the Americans. One good example would be Andrew Grove, one of the founders of semiconductor giant, Intel.

Grove was a Hungarian who escaped from then Communist-controlled Hungary at the age of 20, during the Hungarian Revolution. Penniless and barely able to speak English, he eventually made his way to New York in 1957. While working, he managed to earn a bachelor’s degree in chemical engineering from the City College of New York in 1960, followed by a Ph.D. in chemical engineering from the University of California, Berkeley in 1963.

After completing his Ph.D., Grove worked at Fairchild Semiconductor as a researcher, and by 1967 had become its assistant director of development. In 1968, Robert Noyce and Gordon Moore started Intel and Grove joined them. He worked initially as the company’s director of engineering, and helped get its early manufacturing operations started. He eventually became Intel’s President in 1979 and CEO in 1987. He went on to become Intel’s Chairman and CEO in 1997. He remained as Chairman till 2004 before he retired.

Grove is credited with having transformed Intel from a manufacturer of memory chips into one of the world’s dominant producers of microprocessors. During his tenure as CEO, Grove oversaw a 4,500% increase in Intel’s market capitalization from $4 billion to $197 billion, making it the world’s 7th largest company, with 64,000 employees. In 1997, Time magazine chose him as “Man of the Year”, for being “the person most responsible for the amazing growth in the power and the innovative potential of microchips”.

Today, all PCs in the world use Intel microprocessors.

In the case of Singapore, incidences involving foreigners in the last decade have resulted in Singaporeans questioning if the government is letting the “right” kind of foreign talents into Singapore.

In one of the most famous cases which captivated Singaporeans is Chinese national Yang Yin. Yang was able to con Singapore government agencies like MOM and ICA with a fake business degree to grant him a work pass to work here, and later even a PR. His case came to light when the niece of the widow whom he was stealing money from, started a civil lawsuit against him.

In one of the US cable that was leaked in 2011, a Chinese-born consultant (now Singapore Citizen) was quoted saying that Singapore has a policy of recruiting the “best and the brightest” to Singapore, but that policy is a double-edged sword.

The consultant said in a 2009 interview that although many mainland Chinese feel comfortable in Singapore, many of the more talented ones view Singapore as a stepping stone to the west. Singapore is an ideal place for those with such ambitions to learn western customs and improve their English.

A mainland Chinese undergraduate studying in Singapore said that the majority of her compatriots were looking to continue their studies and careers in either the United States, Canada or Australia. She was confident that all of them would receive PR status in Singapore, but doubted any would remain here. “We’d only stay on if we cannot find opportunities abroad,” she said.

Then, we have numerous incidents of “foreign talents” hiring “foreign talents”, unfairly discriminating Singaporeans. The situation got so bad that the issue was brought up in Parliament in 2013. It was revealed that DPM Tharman and then Manpower Minister Tan Chuan-Jin had to meet with senior management of financial institutions on a number of occasions to tell them to hire more Singaporeans.

In Parliament at the time, Tan acknowledged that there had been unhealthy “Foreign Talent” enclaves emerging in the financial industry and job discrimination against Singaporeans. He said, “We have heard anecdotes of how in certain cases, heads of business units or HR managers have a preference for candidates they are familiar with or of the same nationality, for reasons that are irrelevant to job performance and irrespective of whether they are more competent than other candidates.”

“We have also heard of situations where Singaporeans were retrenched or made to resign in the name of down-sizing, only to realise later that their positions were given to foreigners, who were coincidentally from the same countries as the business heads.”

“Let me be quite blunt. Would these practices not sound discriminatory? Would any respectable progressive company endorse these practices? If this hiring is indeed because they care only about choosing familiar candidates and not about hiring the ‘best man for the job’, then such practices have no place in Singapore’s workplaces. Discrimination will not and cannot be tolerated.”

Subsequently, Tan was moved out from the Cabinet and appointed as Speaker of Parliament.

MOM later instituted the Fair Consideration Framework and the Jobs Bank to mandate that companies should consider Singaporean job applicants first before they can hire “foreign talents”, but many loopholes exist.

Questions continue to be raised if the national Jobs Bank can really help Singaporeans get fair access to high-quality jobs, as a company bent on hiring a foreigner can still put up the job advertisement on Jobs Bank for 14 days just to “wayang”, before hiring the foreigner.

The company can always later give the excuse that all the Singaporean applicants cannot meet their requirements. For example, the following posting was found on Singapore Expats Forum: 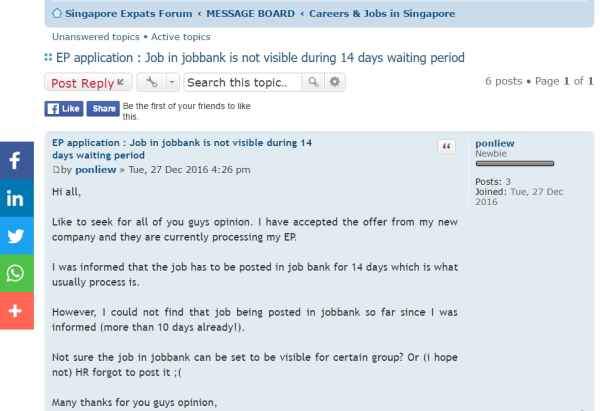 In this particular case, one has to ask how did the company select the foreigner for the job even before putting up the job advertisement in Jobs Bank, to begin with?

A brief look at Malaysia’s removal of GST