In a media release yesterday (26 Mar), the official government feedback website REACH published findings of its poll on public “Attitudes towards Fake News”.

“Majority of respondents concerned with the spread of fake news and support the strengthening of laws to better deal with this issue,” REACH said.

REACH explained that it conducted two polls through phone interviews from 8 to 19 May last year and from 12 to 20 February this year. Respondents were asked a series of questions relating to their experiences regarding fake news so as to study and track attitudes towards the spread of false information.

Respondents were randomly selected Singapore residents aged 15 and above, REACH said. It published the details of the polls in the following document which was made public yesterday.

One of the important questions asked was where did one usually come across “fake news”. Half said they came from WhatsApp while slightly less than half (46%) said Facebook. Note that the respondents could choose multiple media. Interestingly, no one seems to mention mainstream media during the phone interview. 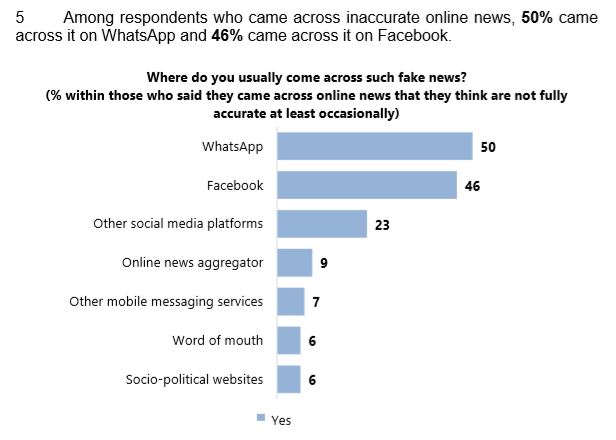 Zaobao adds salt and pepper to the results

This morning, Chinese newspaper Zaobao, a mainstream paper from SPH, reported the news from REACH and also produced the same result of the above question asked in the poll in its paper.

The big difference is, Zaobao has surreptitiously added in the name of TOC into the table.

In the original source, REACH only listed “Socio-political websites” as one of the respondents’ answers, which garnered 6%.

In Zaobao’s report that was published on the front page, it added:

That is: “Socio-political websites (Like The Online Citizen TOC etc)”

In essence, Zaobao is giving the impression to the Chinese readers in Singapore that TOC is largely responsible for the 6% with that one picture.

Going through the original poll results, REACH did not mention TOC nor gave a further breakdown of the 6% for the socio-political website category.

In Singapore today, there are at least dozens of socio-political websites online. Why did Zaobao want to single out TOC alone?

Has Zaobao done any research as to the composite breakdown of the Singapore socio-political websites and their respective contribution to “fake news” (if any) individually?

If not, Zaobao certainly owes an apology to TOC and the other outlets that are named in the graphic published in its paper.