Brace yourselves: US rate hike is back

The Dollar jumped after Federal Reserve’s chairperson, Janet Yellen, signaled impending rate hike in a speech at Jackson Hole last Friday. Her speech presented an increasing probability that the central bank will raise short-term interest rates in the weeks or months ahead. While the rate hike has not yet happened, markets have already begun to move and shift with the assumption of a hike.

The implied probability of a September rate hike rose to 42% from 32% just one day ago, and the chance of a December rate hike is now standing at 65% – the highest level in three months. The dollar index climbed nearly 1% to 95.50 from 94.60.

USD/JPY soared to 102 this morning, attributing to both a stronger dollar and also Kuroda’s “ready to ease” stance in a statement on Saturday. Nikkei Index opened 2% higher on a weaker yen.

Major markets have experienced high volatility both to upsides and downsides, thus volatility index jumped to a three-week high.

Gold, oil and silver continued to slide as the dollar strengthen. In the near future, a stronger dollar is going to suppress commodities’ prices if there are raising expectations of a rate hike in the coming weeks.

US equities experienced a choppy session last Friday. Asia Ex-Japan markets opened mostly lower, as investors are more cautious about equities valuation in the face of an impending rate hike. Market sentiment is likely to remain weak for equities and uncertainties are rising.

On the backdrop slumping commodities, weaker demand and overcapacity in emerging economies, sentiment has become more fragile and susceptible to any form of shocks. These shocks include the likes of the Federal’s rate normalisation path, the US elections, as well as rising political and financial risks in overseas markets. 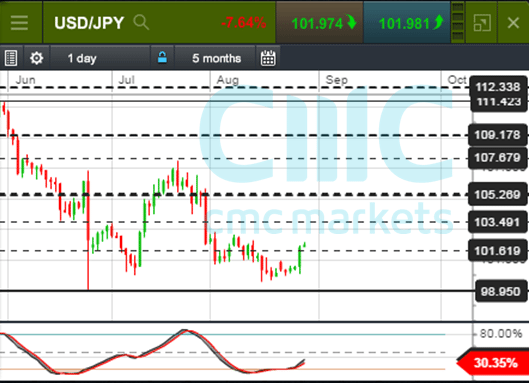