Growth at all costs: Who pays?

By SGCharts.com (Image by Joshua Chiang)
A hard look at the numbers from the Department of Statistics’ Household Expenditure Survey (HES) 2012/13 shows the real winners and losers of the heady GDP growth of the past decade.
How Much Did You Spend Today?
Do you know that there are 4,648 households in Singapore that survive on less than $10 per person per day? Mind you, that budget includes not just food, but also items such as utilities, S&CC charges, transport, medical costs and school fees! 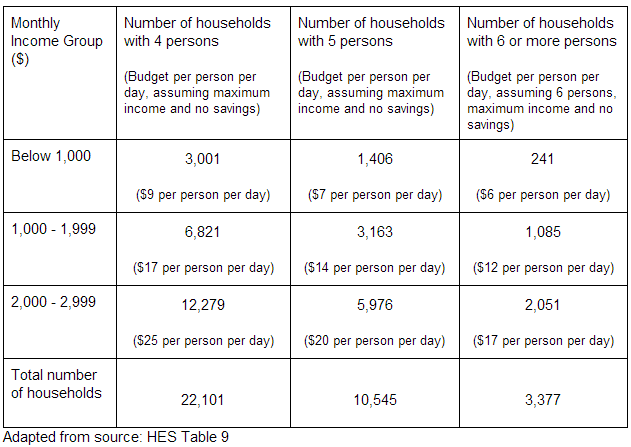 Source: HES Table 50
For their monthly income, retiree households receive, on average, $208 in annuities and monthly payouts from the CPF Minimum Sum Scheme and CPF Life.
For those staying in 1 and 2-room flats, their monthly CPF payout is the lowest at $93 (about $3 per day).
Retirees staying in condominiums and other private apartments receive the highest monthly CPF payout of $513 (about $17 per day).
With the exception of those staying in landed properties, CPF payouts form 12% – 14% of the monthly income of retiree households.
CPF Life is mandatory for Singaporeans turning 55 after 2012. CPF Life is an annuity scheme that allows members to receive a monthly income for life. However, this also means that CPF Life offers a lower monthly payout than the Minimum Sum Scheme, where the payouts last about 20 years. Is CPF Life truly adequate for our retirement? Well, unless you are in your late fifties or older, dear reader, you have no choice in the matter.
The Super Rich
Singapore is becoming a playground for the super rich. Want to know how rich they are getting? Just follow the money trail. The sale of luxury cars is booming. The number of Maseratis on Singapore roads leapt by a whopping 19x from 30 (2002) to 584 (2013). Lamborghinis? They are selling like (million-dollar) hotcakes. The Lamborghini population shot through the roof at an astounding 22x from 15 (2002) to 334 (2013).
Our politicians are not clueless either; they are riding on the coattails of the ultra rich by pegging their pay to the top 0.05%** citizen earners, and then taking an arbitrary 40% discount to “signify the sacrifice that comes with the ethos of political service”. Even after the 40% discount, the annual salary of the MR4 entry grade for Ministers is $1,100,000. As the paper estimates the annual salary package to be 20 months, the monthly pay of a MR4 Minister is $55,000 ($1,100,000 / 20 months). This places the MR4 salary grade at twice the average monthly household income of the top 10% income group, which earned $26,622 in 2011.
(**Ministerial pay is pegged to the top 1,000 citizen earners with a 40% discount. According to MOM’s 2011 Occasional Paper on Singaporeans in the Workforce, there were 1,712,600 Singapore citizens in the labour force in June 2010. Hence, the top 1,000 earners out of 1,712,600 is about 0.05%.)
The Real Deal
But the rich are not the problem. The widening income gap is. The following table shows the dollar change in monthly household income from work (excluding employer CPF) from 2000 – 2012:

Adapted from source: Department of Statistics (DOS) report on Key Household Income Trends 2012. DOS no longer publishes monthly household income excluding employer CPF in the latest report, hence 2013 data is not available. (View full-size in Google Spreadsheet.)
The last column in the table (cells highlighted in yellow) refers to Net Change, which is the sum of all the increases and decreases in monthly household income from 2000 – 2012. The top 10% income group (91st – 100th percentile) almost doubled the income level they received in 2000. Contrast this with the bottom 10% income group, which received only a net increase of $233 after 12 years!
The Net Change column also shows who took second helpings to the growth pie, and then some. Expectedly, those at the bottom of the food chain got the crumbs. The top 10% income group’s slice of the growth pie ($14,150) is 61 times bigger than the last slice that got handed down to the bottom 10% income group ($233). The fallacy of trickle-down economics is self-evident. Singapore has been courting ultra rich foreigners for the past decade, did that help the bottom 10%? Even if Singapore brings in another 10 billionaires, will the jobs and opportunities benefit the bankers or the poor? History has already shown us the results.
Furthermore, differences in income levels are widening between all income groups. For example, the difference in monthly household income between the 81st – 90th percentile and the 91st – 100th percentile was about $6,000 in 2000. This income gap has actually widened to $14,000 in 2012. This means that, even among the top 20% income groups, there exists an income gap and this gap has actually more than doubled in 12 years!
In August, the government celebrated falling income inequality as a key achievement in the Singapore Public Sector Outcomes Review (SPOR) 2014. This report was released just in time for National Day weekend, so that the press could get the rosy story out on everyone’s breakfast table. But just a month later, the data released by the Department of Statistics’ Household Expenditure Survey seems to paint a different picture altogether. The bottom 20% are not saving enough, an uneven playing field between rich kids and poor kids, monopolisation of the growth pie…
All these factors underpin a pivotal moment in our society. Only time can tell who is right.