Netizens criticise parents for stepping in on behalf of the students

SINGAPORE -17 DEC 2017- View of the campus of Yale NUS, an outpost of the New Haven Ivy League at the National University of Singapore (NUS), the oldest research and teaching university in Singapore (Photo by EQRoy from Shutterstock).

About three weeks after the announcement that Yale-NUS College would be closing down in four years, over 260 parents of the institution’s students are demanding to meet National University of Singapore (NUS) president Tan Eng Chye to discuss the closure.

In a letter to Professor Tan on Monday (6 September), the parents identified themselves as parents of current and deferred students, as well as alumni.

Responding to their request the next day, Professor Tan agreed to individual face-to-face meetings with parents of both Yale-NUS students and the NUS University Scholars Programme (USP) in late September.

Dissatisfied, the parents sent another letter on Wednesday rejected Prof Tan’s suggestion of smaller group meetings in favour of a virtual townhall meeting.

They said: “We find that this is a reasonable and respectful request, seeing as to how you preferred to announce your decision to shutter Yale-NUS’ door through a town hall for students.”

They asked that he meet them at a townhall meeting on Friday, 7pm.

The closure of the liberal art’s college was revealed in late August. This would effectively end the collaboration between the United States Ivy League University Yale and the NUS which started in 2011.

It was announced that Yale-NUS would not take in new students and will continue to operate for the next four years until its current students graduate. The college then merge with NUS’ USP to form a new institution, currently named “New College” — without the involvement of Yale.

The dissolution is reportedly based on a clause in the founding of the college back in 2011 which allows either party to unilaterally pull out of the collaboration in 2021.

The announcement was met with shock and pushback from the student body and parents.

It was also reported by Yale Daily News that the decision to close the college and merge with the USP was made without input from Yale.

Netizens criticise parents for getting involved

In the wake of the announcement and demand by parents for a meeting, netizens appear to take issue with parents getting involved.

Many appeared to criticise the students for needing their parents to “make noise” or fight on their behalf.

Some, however, noted that its right for parents to demand a meeting about the closure given that they are the ones who pay the fees that keep the school open. Others pointed out that students did in fact demand a meeting, organised protests, wrote to upper management and “exhausted many options” after the news broke. 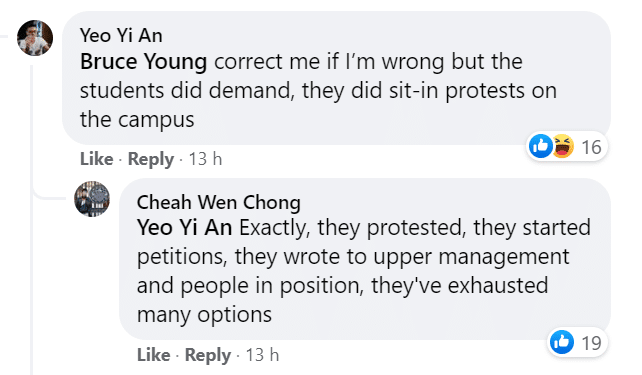 One netizen simply said that it would not change anything.

For just US$7.50 a month, sign up as a subscriber on The Online Citizen Asia (and enjoy ads-free experience on our site) to support our mission to transform TOC into an alternative mainstream press.
Tags: Yale-NUS

by The Online Citizen
1