“This has taken us quite a long journey. It is not an issue only about what Muslims want or what our nurses want to wear – it has national dimensions,” Mr Masagos said to the media after Prime Minister Lee Hsien Loong’s National Day Rally Speech.

“When we move on issues surrounding areas like uniform, we must make sure that everyone understands this move, accepts this move, Muslims, non-Muslims, and that gives it a national dimension. At the same time, we want to make sure that as we move on this, it brings us together, it does not divide us.”

Second Minister for Education Maliki Osman chimed in as well to say that the community is “appreciative” of the announcement and of society’s understanding of Muslim women’s desire to wear the tudung.

“We hope that this will also continue to allow them to perform their duties effectively, professionally, especially during this time when they are in the frontline fighting COVID for us,” said Mr Maliki.

In a press release on the same day, the Ministry of Health (MOH) noted that the policy will be applicable to over 7,000 female Muslim uniformed staff in the public healthcare sector.

This includes staff from the public healthcare clusters of SingHealth, the National Healthcare Group, and the National University Health System, as well as the Health Promotion Board (HPB), Health Sciences Authority (HSA), Vanguard Health, and the MOH holdings.

On top of that, the Ministry of Manpower (MOM) released a statement on Sunday encouraging private sector healthcare employers to reference the new policy as well, though it added that it is not compulsory.

“Private sector employers should continue to establish uniforms or dress code requirements that are suited to the nature of their work, or for operational and safety reasons.

“Where such requirements do not allow for religious attire or artefacts, employers must communicate and explain the reason clearly to employees and job applicants,” said MOM’s spokesperson.

While the local Muslim community celebrates the new policy, Mr Masagos’ remarks were not so well-received by everyone. Netizens on CNA’s Facebook page chided the Minister for appearing to take credit and celebrate the new policy when he was initially against the issue. 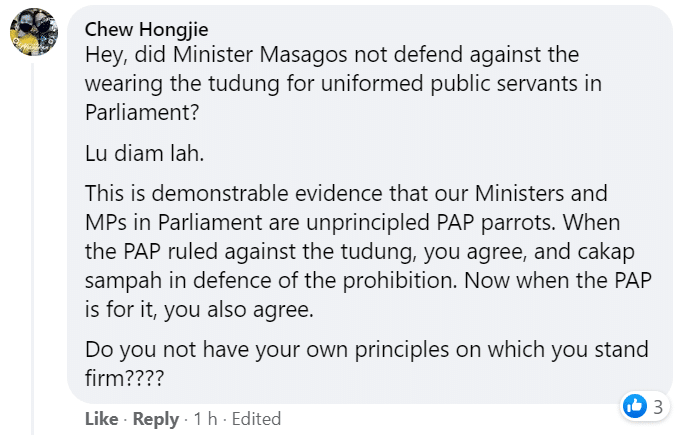 Earlier in March, the issue was debated in Parliament again with Mr Masagos facing off with Worker’s Party (WP) Member of Parliament (MP) for Aljunied GRC Faisal Manap.

Mr Manap had asked whether the Government would reevaluate its tudung ban for women working in uniformed service. Specifically, he argued that allowing nurses to wear a tudung at work would expand the local pool of nurses.

Mr Masagos, however, said that allowing nurses to wear the tudung “would introduce a very visible religious marker that identifies every tudung-wearing female nurse or uniformed officer as a Muslim”.

“This has significant implications: We do not want patients to prefer or not prefer to be served by a Muslim nurse, nor do we want people to think that public security is being enforced by a Muslim or non-Muslim police officer.

“This is what makes the decision difficult and sensitive,” he elaborated.

Mr Masagos added that sensitive issues such as these necessitate “closed-door discussions” and consultations with the community.

Expounding on Mr Masagos’ views, Mr Maliki said that uniforms are meant to project neutrality and a common identity.

In the case of nurses and other public healthcare workers, he asserted that a uniform “underscores” the concept that such professionals “provide impartial care regardless of race or religion”.

Coming back to the latest news, a couple of netizens expressed their gratitude to Mr Faisal for championing the cause in Parliament to begin with.

Even WP shared a reminder in a Facebook post, saying that the alternative party’s MPs have spoken in Parliament over the years to push for the removal of the tudung ban.

In 2017, Mr Faisal had spoken about how Muslim women should “be given the chance to fulfil their career aspirations while meeting their religious obligations”.

This year, first-time MP Raeesah Khan highlighted the lack of inclusivity in certain workplaces, especially for women who wear the hijab.

For just US$7.50 a month, sign up as a subscriber on The Online Citizen Asia (and enjoy ads-free experience on our site) to support our mission to transform TOC into an alternative mainstream press.
Tags: Faisal ManapMasagos Zulkifli

Masagos says beaches are overcrowded while STB is forking out $45 million to encourage local tourism – contradiction?