She wrote: “The Prime Minister of Singapore (a country that only has three deaths out of 6 million people) speaks such common sense.”

“He tells people the truth and they did everything that needed to be done to be ready for this virus,” she continued.

Her tweet drew responses comparing PM Lee with New Zealand’s Prime Minister Jacinda Ardern, with one user writing, “New Zealand has a Prime Minister of the same ilk. Jacinda Ardern has handled a massacre in Christchurch this time last year, White Island Volcano eruption & 20 deaths from that disaster & now proving fantastic leadership with what is happening in our country right now.”

Other users also seem to have taken a liking to PM Lee after the interview, with one person commenting, “We enjoyed listening to him today, a very intelligent Prime Minister.”

Yet another wrote, “It is in the DNA of the country, and culture and the people – a great place to call home.”

Barbra Streisand is a renowned Hollywood star living in Malibu, California. In fact, a social phenomenon was named after her, called the Streisand effect, describing a situation when an attempt to hide, remove, or censor information has the unintended consequence of further publicizing that information, often via the Internet.

In 2003, Barbra Streisand sued photographer Kenneth Adelman and Pictopia.com for taking photos of her residence in Malibu in violation of her privacy.

The US$50 million lawsuit endeavored to remove an aerial photograph of her mansion from the publicly available collection of 12,000 California coastline photographs. Adelman had photographed the beachfront property to document coastal erosion as part of the California Coastal Records Project, which was intended to influence government policymakers.

(The original image of Barbra Streisand’s residence in Malibu, which she attempted to suppress in 2003.)

Before Streisand filed her lawsuit, “Image 3850” had been downloaded from Adelman’s website only six times; two of those downloads were by Streisand’s attorneys. As a result of the case, public knowledge of the picture increased greatly and more than 420,000 people visited the site over the following month with many downloading picture of her residence. The lawsuit was subsequently dismissed by a California’s court and Streisand was ordered to pay Adelman’s legal fees, which amounted to $155,567.

Meanwhile, speaking of common sense, some 67 per cent of Singaporeans have disagreed to holding elections during the COVID-19 pandemic, according to recent poll by SPH’s Lianhe Zaobao. 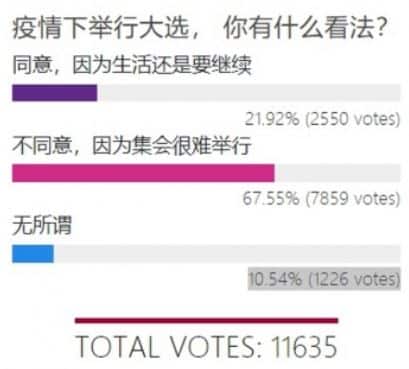 According to the poll, 67.55 percent of 11,635 people disagreed on holding an election during the ongoing coronavirus pandemic as it would be difficult to hold rallies given the current restrictions in place to curb the spread of COVID-19. Also, large number of people would potentially be coming into contact at polling stations.

But PM Lee feels otherwise. In fact, in an interview recently, he said election can still be conducted with the proper measures in place and with the help of the internet.

He said, “You have to make a judgement in this situation with an outbreak going on, with all sorts of exceptional measures implemented in Singapore, is it possible for us to conduct an election and to get this done so that we clear the decks and we can go through and deal with whatever lies ahead?”

“You have to think of solutions for them, but it can be done, and I think that we have to weigh conducting an election under abnormal circumstances, against going into a storm with a (government) mandate which is reaching the end of its term,” he added.

Earlier on 14 March, he hinted in a Facebook post that election will be held early so as to “elect a new government with a fresh mandate” and the government “will take all the precautions necessary, so that parties can campaign effectively, and people can vote safely.”

Indeed, looks like PM Lee has a lot more “common sense” than 67% of those polled.

As of 31 March, the poll by Lianhe Zaobao is no longer publicly viewable.