Could PM Lee’s comparison of Israel’s election during a pandemic be the best example?

While speaking to reporters at the Istana on Friday (27 March), Prime Minister Lee Hsien Loong said that it’s best to give Singapore six months for the whole COVID-19 situation to settle first before holding the next General Election (GE).

He said this after being asked by the media in a doorstep interview on what will he base his decision on before calling for an election, and how he sees castings, Nomination Day and voting being carried out while the country is combating the COVID-19 outbreak.

“If we were sure that the thing could settle within the next six months, I think we can say well, let us wait for six months, let things calm down, then we carry on. But nobody can say. I expect that it can easily get worse before it gets better,” he said.

He added, “You have to make a judgement in this situation with an outbreak going on with all sorts of exceptional measures implemented in Singapore – is it possible for us to conduct an election and to get this done, so that we clear the decks and we can go through and deal with whatever lies ahead of us.”

Mr Lee explained that it will be difficult to have an election in countries that have a general shutdown, like the United Kingdom and Wuhan. This is because it will not be possible to organise anything since everyone has to stay at home.

“How do I get ballot boxes, how do I count the ballots, and how do people come up to vote? It cannot be done,” he said.

However, if a country is not in that situation, then life still continues even if other safety measures like safe distancing is in place.

“But short of that situation, even when you have restrictions and some safe distancing measures, life still goes on. People are working, people can travel, people can conduct the poll and countries have been conducting elections,” the premier noted.

As an example, Mr Lee said that Israel managed to hold an election recently. Even the United States carried on with primary elections in most of its states, he added.

If that not all, PM Lee also said that with social media and the Internet, an election can still be conducted with proper measures in place, although it might not be the most ideal situation.

“So these are, to a large extent, solvable problems. You have to think of solutions for them, but it can be done. I think that we have to weigh conducting an election under abnormal circumstances, against going into a storm with a mandate which is reaching the end of its term,” he opined.

He continued, “We have to make a decision on that. I would not rule any possibility out. I think once all the requirements are cleared, and that includes the electoral boundaries which has been reported, the electoral rolls have to be certified and republished.

Once that is done, that means all possibilities are there. I will have to judge the situation.”

PM Lee had cited Israel for being able to carry out an election recently, amid the global COVID-19 pandemic.

Israel held its legislative election on 2 March this year.

However, when the Middle Eastern country held its election early this month, the number of COVID-19 cases in the country were at the bare minimum.

Based on the chart below, there were only 12 positive cases of the virus in the country at the time. 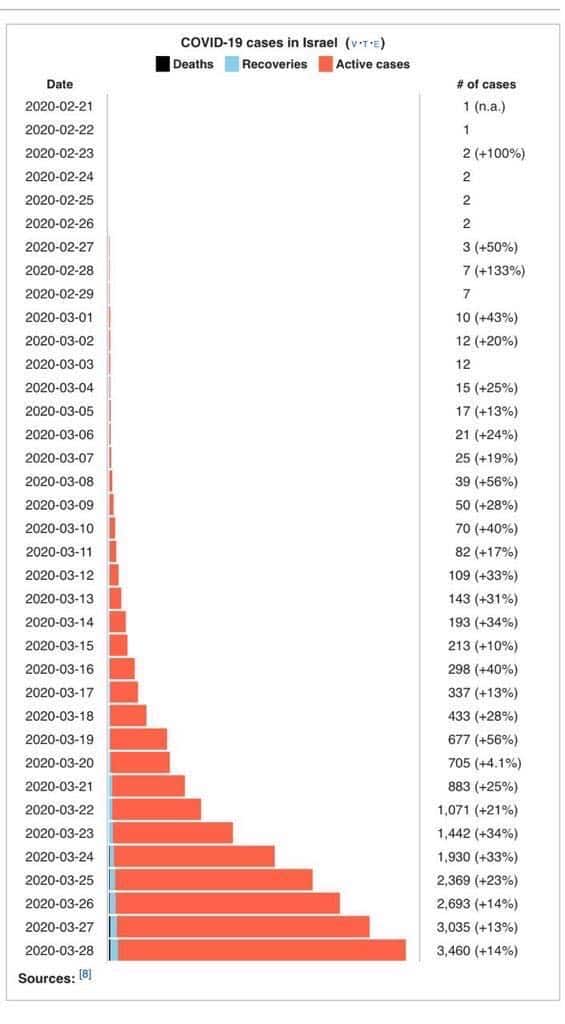 Additionally, no lockdown was imposed in the country that time, allowing elections to go on smoothly with no logistic issues or restricted movement among the people.

But soon after that, the number of cases in the country increased exponentially in the span of just a couple of weeks.

Based on the latest data Worldmeter, at the time of writing, Israel has recorded 4,831 cases of COVID-19 and the virus has claimed 18 lives so far.

Due to the high number of cases growing in just in a couple of weeks, Israel’s Prime Minister Benjamin Netanyahu imposed a complete lockdown in the country starting yesterday (30 March) in a bid to contain the spreading of the deadly virus in the country.

“I want this to be in effect for three weeks, until after the Passover holiday and I will consider the numbers each week. If they show a decline in infected cases I will consider lifting some restrictions on the work market,” said the Prime Minister.

Although Israel managed to conduct an election during this global pandemic, but the situation is slightly different in Singapore.

As of 31 March, there are 926 cases of confirmed COVID-19 infection in Singapore with a growing number of local transmitted infections. Just today, 18 unlinked local infections are confirmed.

In addition to that, the Singapore government gradually imposed enhanced measures for social distancing imposed stricter social distancing rules penalties to those who fail to adhere to these new rules such as being fined or sentenced to jail for their offence.

Given this situation, it will be difficult for the Republic to hold the next GE this year as the number of cases here are a lot higher than when Israel held its and many have regarded the thought of holding a GE during the COVID-19 pandemic as irresponsible.

With the high number of cases, it will also be risky for people to gather in large crowds as it will increase the risk of the virus spreading.