67% disagree to holding elections during the pandemic, according to poll by Lianhe Zaobao

According to a poll by Chinese daily Lianhe Zaobao on their website, 67.55 percent of 11,635 people disagreed on holding an election during the ongoing coronavirus pandemic as it would be difficult to hold rallies given the current restrictions in place to curb the spread of COVID-19.

The question read, “What are your views on holding an election during the ongoing coronavirus pandemic?”

Only 21.92 percent of those polled said that they would be open to having an election at this time as “daily life must go on”. The rest (10.54 percent) said it didn’t matter to them either way. 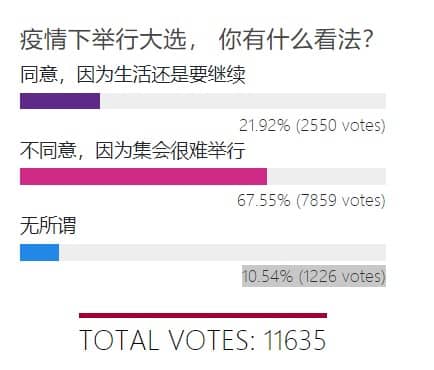 Ever since the Electoral Boundaries Review Committee (EBRC) released it’s report on 13 March, there has been a general uproar from most of the opposition parties and politicians who vehemently urged the government to hold off on calling for elections until after the pandemic situation is over. Concerns raised include that campaign rallies often involve mass gatherings, which in this current climate would be too risky for public health.

Generally, elections are called within a couple of months of the EBRC report being released. Such was the case in the last four general elections. In 2001, elections were called less than a month after the report was released.

The thing is, since the virus made its way to Singapore early this year, precautionary measures and strict regulations have been put in place and gradually scaled up in an effort to curb further spread of the virus within the community.

However, despite those measures, the government has yet to explicitly rule out calling for elections which are due to be held by 15 April 2021.

PM Lee says polls could be conducted during a pandemic

In fact, in an interview recently, Prime Minister Lee Hsien Loong said that and election can still be conducted with the proper measures in place and with the help of the internet, although it might not be the most ideal solution.

He said, “You have to make a judgement in this situation with an outbreak going on, with all sorts of exceptional measures implemented in Singapore, is it possible for us to conduct an election and to get this done so that we clear the decks and we can go through and deal with whatever lies ahead?”

He explained that having an election when a country is entirely in lockdown will be difficult as there would be many logistical issues, though he added later that these are “solvable problems”.

He also added, that if a country is not on lockdown, then life can continue with heightened safety measures.

He noted, “But short of that situation, even when you have restrictions and some safe distancing measures, life still goes on: People are working, people can travel, people can conduct the poll.”

He continued, “You have to think of solutions for them, but it can be done, and I think that we have to weigh conducting an election under abnormal circumstances, against going into a storm with a (government) mandate which is reaching the end of its term.”

Earlier on 14 March, PM Lee has hinted in a Facebook post that election will be held early so as to “elect a new government with a fresh mandate” and the government “will take all the precautions necessary, so that parties can campaign effectively, and people can vote safely.”