The Health Sciences Authority (HSA) has recalled Hyperten Tablet, Losagen Tablet, and Losartas Tablet from Hetero Labs Ltd as they were found to contain trace amounts of a nitrosamine impurity, N-nitroso-N-methyl-4-aminobutyric acid (NMBA), which are above internationally acceptable levels.

In its press release, HSA advised patients not to stop treatment on their own as there is no immediate health risk associated with taking the affected medicines. However, healthcare professionals are encouraged to review the medicine and treatment plans of their patients.

In a separate press release, the Ministry of Health (MOH) stated that about 137,000 patients in Singapore are using the three recalled brands of losartan medicine. Of these, about 130,000 patients have been prescribed Losartas at public healthcare institutions.

The authority noted that not all losartan medicines are affected by this recall, saying that only three out of the ten losartan products in Singapore contain unacceptable levels of nitrosamine impurity. 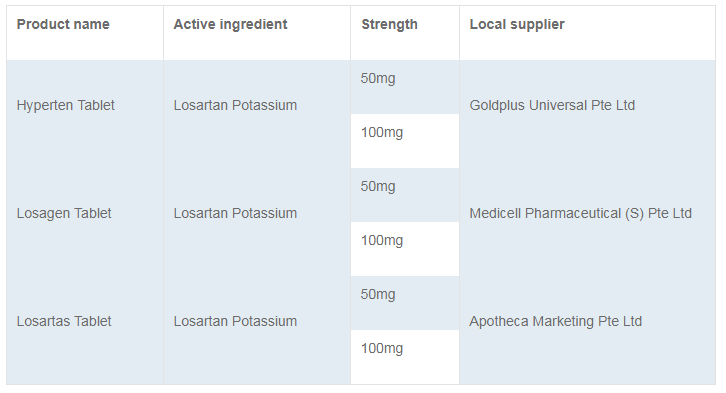 According to the authority, losartan belongs to a class of medicines called angiotensin II receptor blockers (ARBs), which are used to treat high blood pressure, also known as hypertension.

In addition to the three recalled brands, there are seven other brands of losartan medicines marketed in Singapore and these seven brands have been tested by HSA and do not contain NMBA: 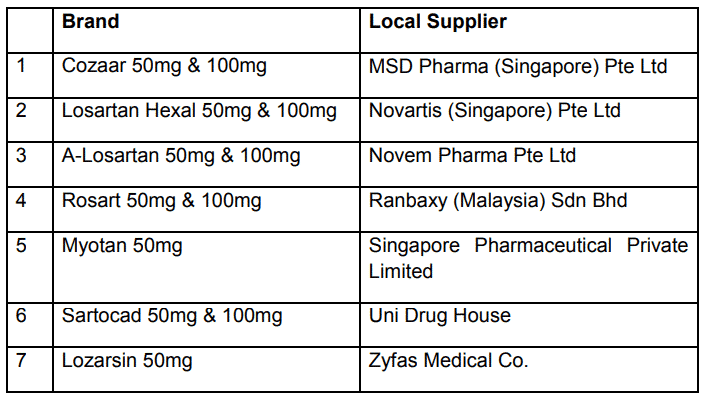 The authority stated that since June 2018, several ARB medicines have been recalled overseas due to the presence of two other nitrosamine impurities, N-Nitrosodimethylamine (NDMA) and N-Nitrosodiethylamine (NDEA).

HSA noted that it had tested the locally marketed ARB medicines and none of them was found to contain unacceptable levels of the two impurities.

In end-June 2018, several valsartan-containing medicines were recalled overseas due to the presence of NDMA. Based on HSA’s checks, none of valsartan products marketed in Singapore were affected.

Meanwhile, in September 2018, several overseas regulatory agencies recalled affected ARBs due to the presence of NDEA. HSA had tested the ARBs marketed in Singapore and none were found to contain unacceptable levels of these impurities.

Since November 2018, HSA stressed that it has required companies to test for these impurities in their products and comply with international standards, to ensure the continued quality of the products imported into Singapore.

Since end-February 2019, several losartan medicines were recalled overseas due to the presence of NMBA.

According to the authority, all locally marketed losartan products have been tested for the presence of the new NMBA impurity. By testing all brands of losartan medicines available locally beyond Hetero Labs products, HSA said that it is able to advise which brands did not contain NMBA, and help healthcare professionals decide on suitable alternatives for patients in place of the recalled brands.

HSA said that the risks of trace amounts of NMBA are associated with long term exposure. Sudden stopping of the medicines can pose a greater and more immediate risk to the patient’s health.

Professor Ding Zee Pin, Cardiologist in the National Heart Centre Singapore and HSA’s Expert Panel on Nitrosamines advises: “There is no immediate health risk associated with taking the affected medicines, and patients are advised not to stop or change treatment on their own. As losartan is used to treat high blood pressure, stopping the medicine without replacement of other equivalent medication can increase the risk of poor control of blood pressure.”

HSA advises consumers who are taking the three affected brands of losartan medicines to do the following: