TISG lashes out in response to NCMP Daniel Goh’s condemnation

“TISG crossed the line for me into endorsing tasteless xenophobia and linking it to our electoral democracy. It is sensational, senseless and nonsensical. Sad.”

In particular, he found the exercise of editorial discretion to place a “tasteless and xenophobic” comment from a “random forum user” as a caption for an article “sensational, senseless and sad.” The comment in question said that it was the influx of foreigners which caused 3 SMRT workers to be diagnosed with Tuberculosis.

In response to the post, TISG launched a diatribe. TISG – currently fronted by Lead Editor Ravi Philemon, who stood as a candidate in the last General Elections – accused NCMP Goh of wanting to score ‘political points’. It also chided him for choosing not to engage with them directly as he ran the risk of losing their “one million unique viewers” directly.

The publication went as far as to argue that NCMP Goh was “faking humbleness.”

At various points in the thread, NCMP Goh did take pains to point out the contradictions in TISG’s retort – like how they accused him of scoring political points while saying that it was his loss if he stops supporting TISG. 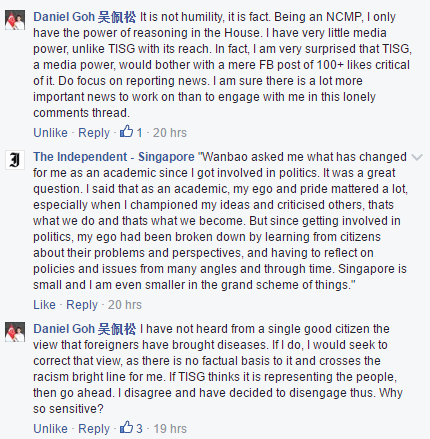 “I am very surprised that TISG would bother with a FB post of 100+ likes critical of it. I am sure that there is a lot more important news to work on than to engage with me on this lonely thread… Why so sensitive?” NCMP Goh riposted.

A Singaporean Journalist, Mr Bhavan Jaipragas, noted that he had written in to Mr Philemon previously about a similar article. He called out Mr Philemon and TISG in a comment on the same thread, too. 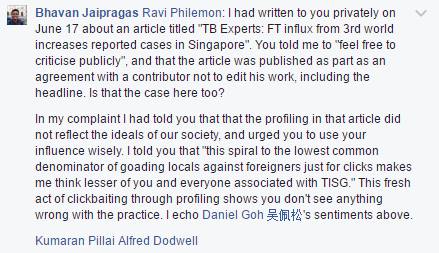 “This spiral to the lowest common denominator of goading local against foreigners just for clicks makes me think lesser of you and everyone associated with TISG,” Mr Jaipragas submitted.

On that occasion, Mr Philemon mentioned that Mr Bhavan should “feel free to criticise (the article) publicly.” He also shifted the blame to an ‘anonymous contributor.’ 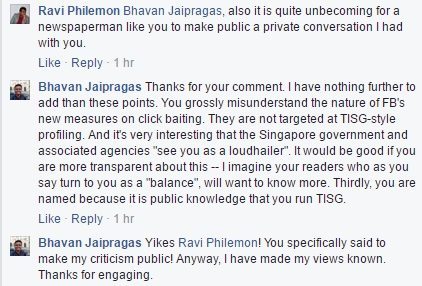 Mr Philemon defended TISG by mentioning how TISG has bucked the trend by growing without doing what ‘STOMP’ and ‘ASS (All Singapore Stuff)’ do. That is, presumably, in reference to the 2 aforementioned sites’ fondness for sensationalism and tabloid journalism. The same charges which NCMP Goh attributed to TISG.
He shared that government and related agencies view TISG as “a useful loudhailer.” A point which Mr Jaipragas urged Mr Philemon to shed more light on. In a bizzare conclusion, Mr Philemon chastised Mr Japiragas for airing his criticism publicly – the exact same criticism that he once encouraged.
Mr Philemon’s exchanges with NCMP Goh and Mr Jaipragas does seem to suggest a U-turn, or at the very least, some inconsistency, in TISG’s position on the freedom to criticize. Considering the overzealous manner in which he replied to the criticisms of TISG, it would most certainly be a Herculean task for Mr Philemon and co. to pin the blame on anonymous contributors, and the like, anymore.