Airbus 320, same plane model as flight QZ 8501
An AirAsia flight from the Indonesian city of Surabaya to Singapore lost contact with air traffic control on Sunday, Indonesian media said, citing a Transport Ministry official.
Transport Ministry official Hadi Mustofa said the aircraft, flight number QZ 8501, lost contact with the Jakarta air traffic control tower at 6:17 a.m local time.
He said the plane had asked for an unusual route before it lost contact. (Reuters)
The plane was supposed to arrive in Changi Airport, Singapore at 8.30am this morning.


QZ 8501 has 155 passengers and crew on board, including one Singaporean, one British, one Malaysian, three Koreans and 149 Indonesians, according to Indonesia’s Transport Ministry.
According to Flightradar24, it did not pick up any emergency signals from flight QZ8501. The signal was just lost at 23:12 UTC (7.12am). Indonesia AirAsia QZ8501 was flying at 32000 feet over Java Sea when ADS-B signal was lost. There were several aircraft nearby the area where signal from QZ8501 was lost.

AirAsia Indonesia regrets to confirm that QZ8501 from Surabaya to Singapore has lost contact at 07:24hrs this morning http://t.co/WomRQuzcPO

“At the present time we unfortunately have no further information regarding the status of the passengers and crew members on board, but we will keep all parties informed as more information becomes available.”
“The aircraft was an Airbus A320-200 with the registration number PK-AXC. At this time, search and rescue operations are in progress and AirAsia is cooperating fully and assisting the rescue service.
“AirAsia has established an Emergency Call Centre that is available for family or friends of those who may have been on board the aircraft. The number is: +622129850801.
AirAsia will release further information as soon as it becomes available. Updated information will also be posted on the AirAsia website, www.airasia.com.”

1215 – Rescue operation under way by Indonesian and Singapore authorities and aviation agencies. 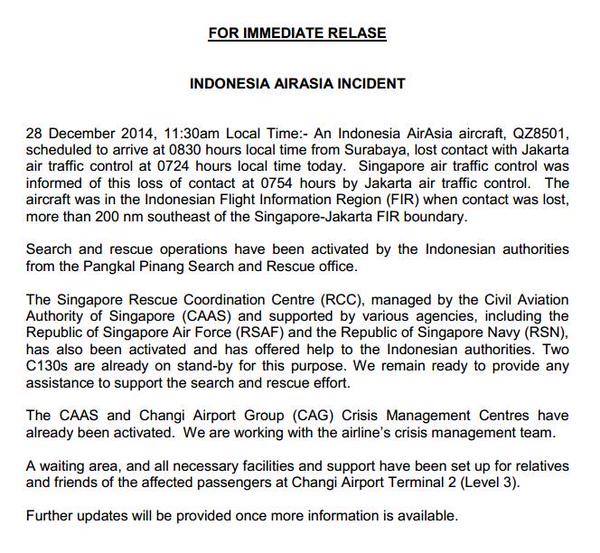 1230 – Some information from Flightradar24 – Flightradar24 did not pick up any emergency signals from #QZ8501. The signal was just lost at 7.12am (Singapore Time). Indonesia AirAsia #QZ8501 was flying at 32000 feet over Java Sea when ADS-B signal was lost. There were several aircraft nearby the area where signal from #QZ8501 lost.

1335 – Some information from MalaysiaKini

1600 – No #QZ8501 press conference in Singapore, Changi Airport officials confirm. All briefings will be held in Indonesia

1720 – About 20 relatives of #QZ8501 passengers, most Indonesians, now at Changi Airport holding area

1800 – No wreckage of #QZ5801 found, poor weather conditions, visibility between 5-10km – Indonesian Navy official. Only about 1 hour of daylight left in search area.

1835 –  Changi Airport Group’s statement: 47 relatives and friends of passengers of #QZ8501 have registered at Changi Airport holding area. 36 airport care officers and 4 MSF counsellors are on hand to offer support. Arrangements for local accommodation or for travel to Indonesia have been made.

1900 – We understand that Singaporean on board #QZ8501 is a 2-year-old girl who was travelling with her father, a British National. The girl’s mother, a Singaporean, had travelled back earlier from Surabaya with girl’s older sibling.

1925 – AirAsia Chief Tony Fernandez says “This is my worst nightmare.”
“I am touched by the massive show of support especially from my fellow airlines. This is my worse nightmare. But there is no stopping. To all my staff Airasia all stars be strong, continue to be the best. Pray hard. Continue to do your best for all our guests. See you all soon. Our priority is looking after all the next of Kin for my staff and passangers. We will do whatever we can. We continue to pass information as it comes. I as your group ceo will be there through these hard times. We will go through this terrible ordeal together and I will try to see as many of you.”
1930 – #QZ8501 search and locate operations suspended for tonight, will resume tomorrow.

2030 – Key points from the latest statement by the Civil Aviation Authority of Singapore (CAAS) –
1. Two more Singapore planes will set off early tomorrow morning
2. CAAS will be sending an officer to the Indonesian National Search and Rescue Agency in Jakarta to assist in the coordination with the Indonesian authorities on the search operations.
3. The Singapore Ministry of Transport’s Air Accident Investigation Bureau has offered two teams of specialists and two sets of underwater locator beacon detectors to assist with the search.
4. The Singaporean on board has been confirmed to be a 2-year-old girl. She was travelling with her father, a Briton.

2200 – #PrayForQZ8501 begins trending as many on social media offer good wishes and prayers to those on board #QZ8501 and the families of those on board.

2334 – In it’s latest statement, AirAsia Indonesia CEO Sunu Widyatmoko said: “We are deeply shocked and saddened by this incident. We are cooperating with the relevant authorities to the fullest extent to determine the cause of this incident. In the meantime, our main priority is keeping the families of our passengers and colleagues informed on the latest developments.”
AirAsia management and the Governor of East Java and officials from the National Search and Rescue Agency of the Republic of Indonesia (BASARNAS), Airport Authority of Indonesia, and the airport operator met with family and friends of QZ8501 passengers to update them on latest developments, and “reconfirmed their commitment to providing assistance in every possible way.

0130 – Queens Park Rangers, a football club owned by AirAsia Chief Tony Fernandez, observed a moment of silence for #QZ3501 in London before their match against Crystal Palace.

0730 – With daybreak, the search for the missing AirAsia flight #QZ8501 has resumed. “We are focusing search area in waters on east, north part of Belitung island”: Indonesia Air Force official.
The Australian Defence Force has joined in the search. It deployed a Royal Australian Air Force AP-3C Orion Maritime Patrol Aircraft to assist in the Indonesian-led search.

1300 – Indonesia to review local AirAsia Operations
“We will review AirAsia Indonesia to make sure its performance can be better in the future. Much will be reviewed in terms of its business operations and in terms of air transportation business, so that there are safety improvements,” Indonesian Transportation Minister Ignasius Jonan told reporters on Monday.