A former deputy group director of the Land Transport Authority (LTA) pleaded guilty on Thursday (26 August) to seven charges of receiving S$1.24 million in bribes in the form of loans to advance the business interests of contractors and subcontractors.

Henry Foo Yung Thye, 46, was previous the deputy group director who oversaw the construction of the Thomson-East Coast and Cross Island lines for the LTA.

29 other charges were also taken into consideration for his sentencing.

The prosecution said that Foo had received a total of S$1.24 million in corrupt gratifications, and of this amount, he had already repaid S$83,750.

According to court documents, the Corrupt Practices Investigation Bureau (CPIB) received an anonymous complaint in October 2018 that Foo had been soliciting loans from subcontractors involved with projects under his care.

Additionally, CPIB also received information that Foo had asked for financial assistance from the director of China Railway Tunnel Group to pay off his personal debts.

CPIB’s investigations found out that Foo had received bribes in the form of loans from contractors and subcontractors in order to advance their business interests with LTA. These companies had about S$815 million worth of contracts with LTA which was supervised by Foo.

In court, Deputy Public Prosecutor Victoria Ting had sought a jail term of six year and three months for Foo, as she described his case as “the most significant case of public sector corruption” in recent years.

She added that the accused’s culpability was enhanced as he repeatedly asked for monetary gratification.

She also said most of the contractors had first rejected Foo’s requests, but agreed only after he made repeated subsequent demands.

The prosecutor also highlighted Foo’s abuse of power, stating that this positions as chairman of the LTA’s tender evaluation committee and member of the tender steering committee, as well as his position as project director for many other projects.

Separately, Foo’s defence counsel Lim Ker Sheon had called for his client to not be given more than three years and 10 months jail term.

He argues that LTA’s checks and balances systems would have caused Foo to have “little ability to influence tender outcomes”, and that this was something the contractors knew about.

Mr Lim, who is representing Foo on pro bono, said that it was an undisputed fact that his client’s acts had no influence on tender outcomes.

He went on to note that LTA did not suffer any monetary loss, adding that the only damage it experienced came from the release of confidential information and the contractors having an insider at the agency.

Mr Lim also stated that his client intended to plead guilty when proceedings started. He also highlighted Foo’s cooperation with the police investigations where he had admitted to all the loans he had taken.

The Institute of Mental Health also found that Foo has a pathological gambling disorder, which means that he would borrow money from anyone who felt close to support his habit.

The defence also said that Foo’s chances of reoffending were “practically nil”, and his chance of rehabilitation was high.

Foo will appear in court again on 2 September to hear his sentencing.

Others slammed Foo for his heinous act, adding that he brings shame to the company and that he should be canned for his offences. They also said that he is so “greedy” and “heartless” for taking such a big amount of bribes, with one online user noting that he had lost everything from freedom to dignity due to his act. 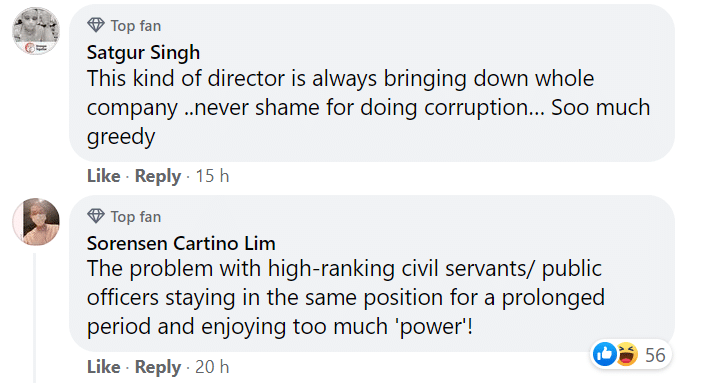 Some blamed LTA saying that they are not surprised that such a case happened in LTA as it is “badly managed”. One user said that corporate governance and ethics in Singapore is “really in shambles” as corruption is becoming prevalent.