Having suffered a cardiac arrest after his first COVID-19 vaccine jab, a 16-year-old boy has received S$255,000 under the Vaccine Injury Financial Assistance Programme (VIFAP), said the Ministry of Health (MOH) on Monday (16 Aug).

This is the highest amount anyone can receive under the programme.

In the case of the teenager, MOH said in its statement he is recovering steadily and is undergoing inpatient rehabilitation. He can now perform daily living activities without assistance, the Ministry added.

“He will likely be discharged in the coming weeks, but will likely require outpatient rehabilitation for some time before he can return to school and resume other activities,” the statement read.

It was noted that a medical team will continue his treatment and monitor his condition.

According to the MOH, the boy collapsed in his home after a gym weightlifting session on 3 July, just six days after getting his first dose of the Pfizer-BioNTech/Comirnaty vaccine.

Medical investigations found that the boy had developed acute severe myocarditis, or inflammation of the heart muscles, which led to the cardiac arrest, said MOH.

The statement added that the myocarditis was likely a serious adverse event caused by the vaccine he received, which could have been aggravated by the strenuous weight lifting and high consumption of caffeine in the form of energy drinks and supplements.

He was in critical condition following the cardiac arrest and was placed in the intensive care unit at the National University Hospital (NUH).

On the one-time VIFAP payment of S$225,000, MOH said that the independent clinical panel appointed to assess and adjudicate VIFAP applications found that while the boy has made good improvement, his condition is “severe and critical” and he would require treatment and rehabilitation “for some time yet” to continue his recovery.

The 16-year-old is not the first to receive financial aid under VIFAP, though it is the highest payment.

Health ministry On Ye Kung revealed in a written parliamentary reply on 6 July that authorities had approved S$451,000 worth of financial aid under the programme as of 25 June to 102 applicants who had suffered serious side effects from the COVID-19 vaccine.

According to the MOH website, the financial aid provided via VIFAP is fixed and depends on the severity of the side effects which are classified into three categories.

The first is side effects that result in death or permanent severe disability. The one-time payment for this is S$225,000.

The second category, with a pay-out of S$10,000, applies to cases that require admission to high dependency or intensive care with subsequent recovery.

The third category is in cases that require inpatient hospitalisation and medical intervention with subsequent recovery, excluding visits to A&E without subsequent inpatient admission. The payout for this category is S$2,000.

The payouts will be determined based on the highest quantum a person is eligible for.

In its statement, the Ministry also advised people to avoid any strenuous activity for seven days after receiving their first and second dose of the vaccine, and to seek immediate medical attention if they develop chest pains, shortness of breath or abnormal heartbeats.

Additionally, individuals who developed myocarditis after their first dose of the mRNA vaccine should not receive further doses.

MOH also noted that the local incidence rate of myocarditis after being vaccinated, the rate remains low at 0.48 per 100,000 doses administered based on data from the Health Sciences Authority (HSA).

Last month, a man named Andrew Tan claimed that his mother passed away “suddenly” just 29 hours after taking her first dose of the Pfizer-BioNTech COVID-19 vaccine. She has collapsed while mopping the house.

TOC understands that the death of Mr Tan’s mother is under pending review as the toxicology report will take a couple of months to be completed. However, the MOH is disputing any connection between her death and vaccination.

Following reports of the teenager’s cardiac arrest and subsequent VIFAP payout, netizens rallied on The Straits Times and Channel NewsAsia Facebook Pages to wish him well. However, several commenters wondered about the severity of his conditions since he was determined to be eligible for the highest payout available reserved for death or permanent disability. 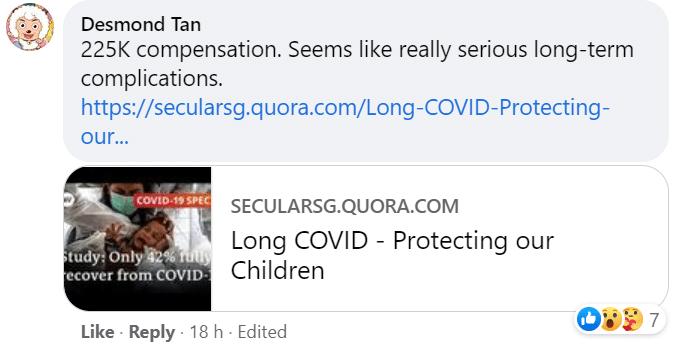 Many were also concerned that the sum of S$225,000 may not be enough to cover all his medical bills or the potential loss of income that he will suffer due to his condition.

Two netizens suggested that the MOH should bear all his medical costs for the rest of his life as well.

Others cautioned that young people should think twice before being inoculated, and suggesting that they should be given a choice of receiving other vaccines like Sinovac instead.

One person questioned the MOH’s advice to seek medical attention if they suffer chest pains or shortness of breath. She noted that when she informed authorities of her brother’s case when he became breathless after the first dose, she was told not to “speculate”. 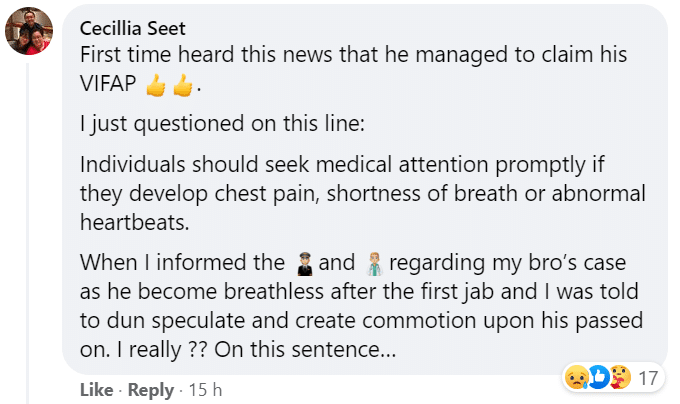