“When the bar is too low, it can be equivalent to ‘free'”, says PSP’s Jeffrey Khoo about Employment Passes

Illustrating an example of the level of competition Singaporean PMETs face when available jobs are open to foreign talent from India which has a significantly larger population and therefore graduates, Progress Singapore Party (PSP)’s Jeffrey Khoo did a simple experiment.

In a Facebook post on Wednesday (15 July), Mr Khoo said he tried out the Ministry of Manpower (MOM) employment pass (EP) eligibility test to illustrate the argument that there has been no “free access” when it comes to EPs.

He said, “But when the bar is too low, it can be equivalent to “free”, particularly when there is no cap or quota.”

For his test, Mr Khoo used an example of an Indian National who graduated from the University of Hyderabad in India which has a rating of 601-650 in the QS Global Ranking for universities.

For reference, Mr Khoo noted that NUS and NTU are ranked 11th and 12th respectively while India’s top universities are “only at best in the top 200 ranking”.

Mr Khoo’s fictitious applicant has also “worked for 6 years and is applying for an IT service Manager job in Singapore that pays $7000 a month”.

The results, which Mr Khoo shared in screenshots, shows that the applicant does qualify for an EP subject to other checks such as “employer’s eligibility” and the applicant’s history.

Mr Khoo asked in his post: “Now take a step back and think about the number of universities in India, and the number of graduates they will produce.

“What do you think will be the end result if every good paying PMET job available in Singapore is open to India and the world?”

In the comments section of his post, Mr Khoo said that he thinks it would be better to have some form of limits on EPs, acknowledging that “This has to be carefully considered as we do need to have some foreign talents in Singapore.”

“The important question is how many and of what quality,” he added. 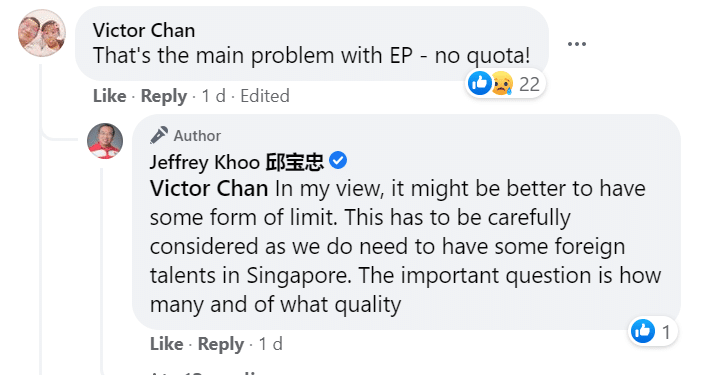 One netizen shared how their former boss, an Indian national, was “very fond of getting” his Indian colleagues from the company’s Mumbai branch to understudy them.

Mr Khoo then shared the experience of a fellow PSP member in a senior role who had to take on a waitressing job when she was “replaced by [a foreign] understudy after 4 months”.