Dr Chee Soon Juan’s café, Orange & Teal, does not levy the usual 10 per cent service charge or even GST to customers as they want their staff to be “adequately compensated financially”.

In a Facebook post on Friday (9 July), the Singapore Democratic Party (SDP) secretary-general noted that while many establishments choose to levy those charges – and are entitled to – many do not give those charges to their staff.

“But rather than make you pay 10% more on your bill, I’d rather you leave a tip for the servers (there’s a thank-you box at the cashier’s) if you find the service and food a pleasant enough experience,” he explained, adding that the money is also shared with the kitchen crew.

Drawing a lesson from this scenario, the veteran politician highlighted that he has always championed for workers to be paid more.

Dr Chee asked, “If our Ministers know how to take care of themselves with kingly salaries, why can’t our workers have an equitable share of the pie?”

“When you pay our workers low, they are demoralised, unmotivated and unproductive,” he cautioned.

“The government then uses this as an excuse to criticise Singaporean workers and hire foreigners. This has stoked the current debate about CECA which breeds resentment among Singaporeans.”

Dr Chee went on to say that leaders in business and politics make sacrifices and pay their rank-and-file well, as well as care for the well-being of those they lead.

“They lead from the front, by example and in deed, not just words. They motivate, they inspire, they bring out the best in people,” he remarked.

“I want to get this model right and with your support, I’m confident we’ll achieve it at Orange & Teal.”

Netizens express their support and agreement to Dr Chee’s approach

At the time of writing, Dr Chee’s post has received over 300 comments, with a handful of netizens expressing their support and agreement to the approach taken at Orange & Teal with regards to service charge and tipping. 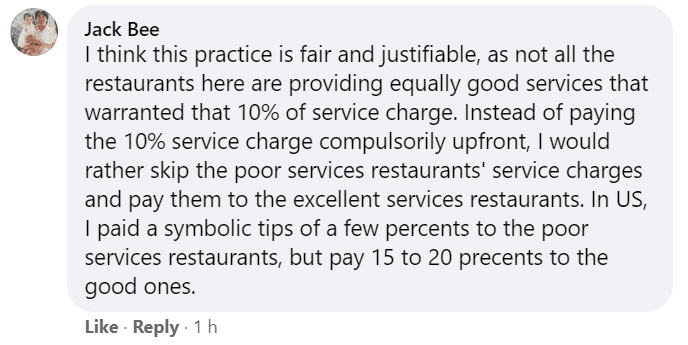 One person said that they know of another eatery that does the same.

Meanwhile, many others also spoke about the harsh reality of service charges, stating that they typically never make it into the pockets of the employees but rather are channeled into the company coiffeurs. One person suggested that it should be made compulsory for companies to pay the service charge profit to employees.

For just US$7.50 a month, sign up as a subscriber on The Online Citizen Asia (and enjoy ads-free experience on our site) to support our mission to transform TOC into an alternative mainstream press.
Tags: Chee Soon JuanOrange & Teal

Chee Soon Juan: Singapore continues to be plagued by a Govt that leeches itself on the economy

SDP’s Chee Soon Juan: Closure of Yale-NUS College by 2025 has made what I said come true