From now onwards, the Ministry of Health (MOH) will be focusing its daily updates on the progress of the country’s vaccination scheme in addition to the daily case numbers. The daily updates will also now include a breakdown of the number of people who have developed a severe form of COVID-19 and their vaccination status.

However, it will no longer share details of each new COVID-19 case in the community such as information on the person’s age, occupation, the date they tested positive or places they had visited.

In a statement on Tuesday (29 June), the MOH said that this approach is taken as the country moves towards a new phase of battling the pandemic.

The decision, made by the multi ministry task force spearheading nationwide efforts against COVID-19, is part of a “strong focus on preventing the virus from spreading, vaccinating our population and starting the process to transit to a new normal,” said the statement.

“Besides daily numbers, we will include information on the key trends of the local situation, clusters we are monitoring, the progress of vaccination and the number of people who suffered a severe form of the disease,” it added.

Previously, the MOH had provided detailed information on each new community case including when they were tested positive, places they had visited and which cases they had been linked too, as well as whether they had been vaccinated.

In the first of its new form of daily updates on Tuesday, MOH noted that there have been five new community cases, four of which are linked to previous cases and have already been quarantined. The remaining one is linked to a previous case and was detected through surveillance.

There were also five imported cases reported, all of whom have been placed on Stay-Home Notice or isolation upon arrival.

The update also included a progress report on the national vaccination programme, noting that a total of 2.09 million people have received both doses of the vaccine.

News of the MOH’s change in reporting strategy has sparked frustration among netizens on The Straits Times Facebook page, however.

Many have pointed out that information such as where a positive community case might have visited is vital to the public to know if they might have been at risk and to know which places to avoid to limit the spread. 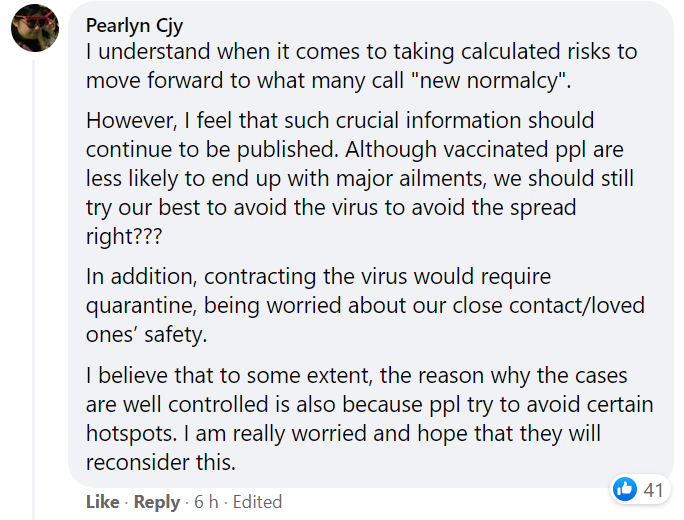 A couple of people questioned the point of continuing to use the TraceTogether system if the public isn’t given information on locations visited by infected cases. One person described the move as “fishy” while another said the authorities should be able to report both details on community cases as well as progress on the vaccination program instead of just one or the other.

Others have also argued that it is the government’s responsibility to be transparent, with one person noting that a lack of transparency could lead to public distrust.

One person said that withholding such information could even lead to people thinking that they can “lax and continue to behave like pre-covid” times.

Another person posited that if the numbers are not coming directly from the government, people could get them elsewhere which may not be accurate, thus starting a “circle of blame”.

Another person also wondered why the MOH has decided to change how they share information, pointing out that the ministry had been fine with sharing details on new cases before this.

Even so, there were a few people who seem to be in favour of the move as a way of reducing public alarm and “obsession” over daily cases, citing “covid fatigue”.

For just US$7.50 a month, sign up as a subscriber on The Online Citizen Asia (and enjoy ads-free experience on our site) to support our mission to transform TOC into an alternative mainstream press.
Tags: COVID-19MOH

by The Online Citizen
40