“Why keep increasing?”: Netizens slam LTA for increasing ERP rates by S$1 at some gantries on AYE and CTE

The Electronic Road Pricing (ERP) rates at some stretches on the Ayer Rajah Expressway (AYE) and Central Expressway (CTE) will be increased by S$1 from 12 Apr onwards, said the Land Transport Authority (LTA).

In a statement on Monday (5 Apr), LTA noted that the increase in rates will help to manage congestion at several locations and further spread out traffic volume.

“In tandem with the progressive easing of safe management measures, traffic volume has built up at certain stretches on the Ayer Rajah Expressway (AYE) and Central Expressway (CTE).

“Specifically, it has been observed that there appears to be a structural change in morning peak hour traffic. Instead of very high traffic volumes concentrated in a short window, we see heavy traffic across a longer duration, from 7 am to 10 am,” it said.

Following this adjustment, ERP will be charged at 12 gantries, compared to 77 gantries pre-COVID, with the highest ERP rate of S$3 as compared to S$6 pre-COVID, it added. 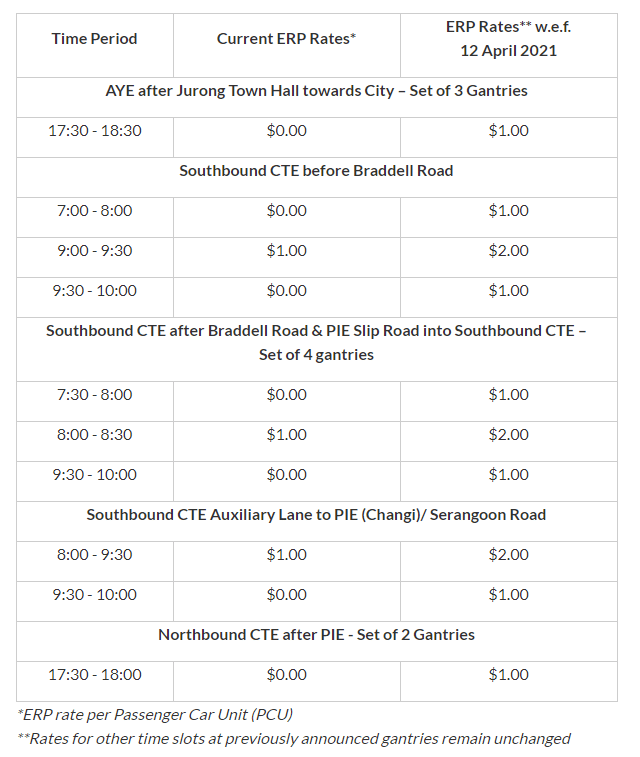 Currently, the highest ERP charge of S$3 is charged from 6 pm to 6.30 pm on the northbound side of the CTE after the Pan-Island Expressway (PIE) exit, which was implemented last October.

Based on LTA’s monitoring of traffic conditions in February and March, it found that traffic speeds have remained “generally optimal” on all arterial roads, including those within the Central Business District.

Hence, ERP charges will remain at S$0 at these locations until the next review, said LTA.

“There continue to be no ERP charges on other expressways and arterial roads,” it stated.

“LTA will continue to monitor traffic speeds and congestion levels closely and assess if ERP rates need to be further adjusted as safe management measures continue to evolve.”

Penning their thoughts under the comment section of CNA’s Facebook post, many netizens expressed outrage over the increase in ERP rates at some gantries on the AYE and CTE, given that the electricity and gas tariffs were also increased last week.

Earlier on, SP Group announced that the electricity tariff before GST will increase by an average of 8.7 per cent or 1.77 cents per kWh – for the period from 1 Apr to 30 Jun 2021 – compared with the previous quarter.

The Group said that this is mainly due to the “higher cost of fuel for producing electricity by the power generation companies”, which is tied to oil prices by commercial contracts.

City Gas also said on 31 Mar that gas tariffs for households will be increased in the second quarter by 0.84 cents per kilowatt-hour to 18.07 cents. This is the price before GST is applied.

Similarly, it stated that the increase is “due to an increase in fuel costs compared with the previous quarter”.

Following that, one netizen wrote: “We are still in the midst of the pandemic and many are jobless and households are still struggling with consistent income. The Govt should continue to help until the pandemic is over instead of increasing our burden.”

Some netizens wrote that no one is complaining about traffic congestion, yet the Government is “quick to increase the rate”.

Another user questioned if increasing the ERP rates is the only solution when it is “obvious” that congestion will still happen even with the increase.

One netizen pointed out that the Government is still increasing the rates amid this “worst time” when everyone is “trying to place food on our table”.

Change the system to protect victims, not the perpetrators