“Both of them did not apply for the necessary police permit before carrying out their activities,” police said, stating that organising or participating in a public assembly without a permit in Singapore is an offence under the Public Order Act.

This is what was reported by CNA about the police investigations on two environment activists who had taken photos alone on two separate occasions. Both individuals are currently being investigated over their involvement in what could be deemed as “a one-man protest”.

While one may have the impression that the two activists should have gone through the proper process of applying for what they wanted to do, my personal experience with the police tells me that the application for the necessary police permit is a sham.

The oft-repeated permit requirement appears to serve as a smokescreen that leads people into thinking that those running into trouble with the Public Order Act could avoid police charges, had they followed standard procedures.

Two years ago, I started a call to action via the TOC Facebook page to get people to sign a Parliamentary petition for the live-streaming of the Parliament sessions. I wrote that I will be outside of the Raffles MRT Station on this particular day and time, so that readers who are keen to sign the petition may come up to me and do so in person.

However, just the night before the actual day, the police licensing department called me to inform that I need to apply for a permit, even when I will not be speaking or holding any signs but simply be present at the MRT station to collect signatures for a petition.

I had to cancel my plans as the police has already made their stance clear.

Undaunted by this, however, I subsequently made a formal application to the police in order to be able to carry out the petition signature collection at the station.

In response to the application, the police sat on the matter and wrote back just a day before the intended event.

2. Similar to your previous application (reference PP/20180222/0002/G), we regret to inform you that your permit application is rejected due to the event may, amongst others, create a public nuisance in a public location that is used by many commuters daily.

Two more applications were made — a similar application for the petition signing and another meant to be held for the Parliament House — as Prime Minister Lee Hsien Loong had said that people are not unhappy with the Central Provident Fund because he does not see any protest outside of Parliament. I had planned for both events to be held in the middle of the night.

Again, the applications were not approved.

I thought that if I could hold a silent protest with no signatories or participant in the middle of the night (10pm to 11pm) in the same location, the police will be able to grant approval to the application, as it will not cause any disturbance to the commuters. Even if there had been anyone around, no one would have known what I was doing sitting alone by the side. 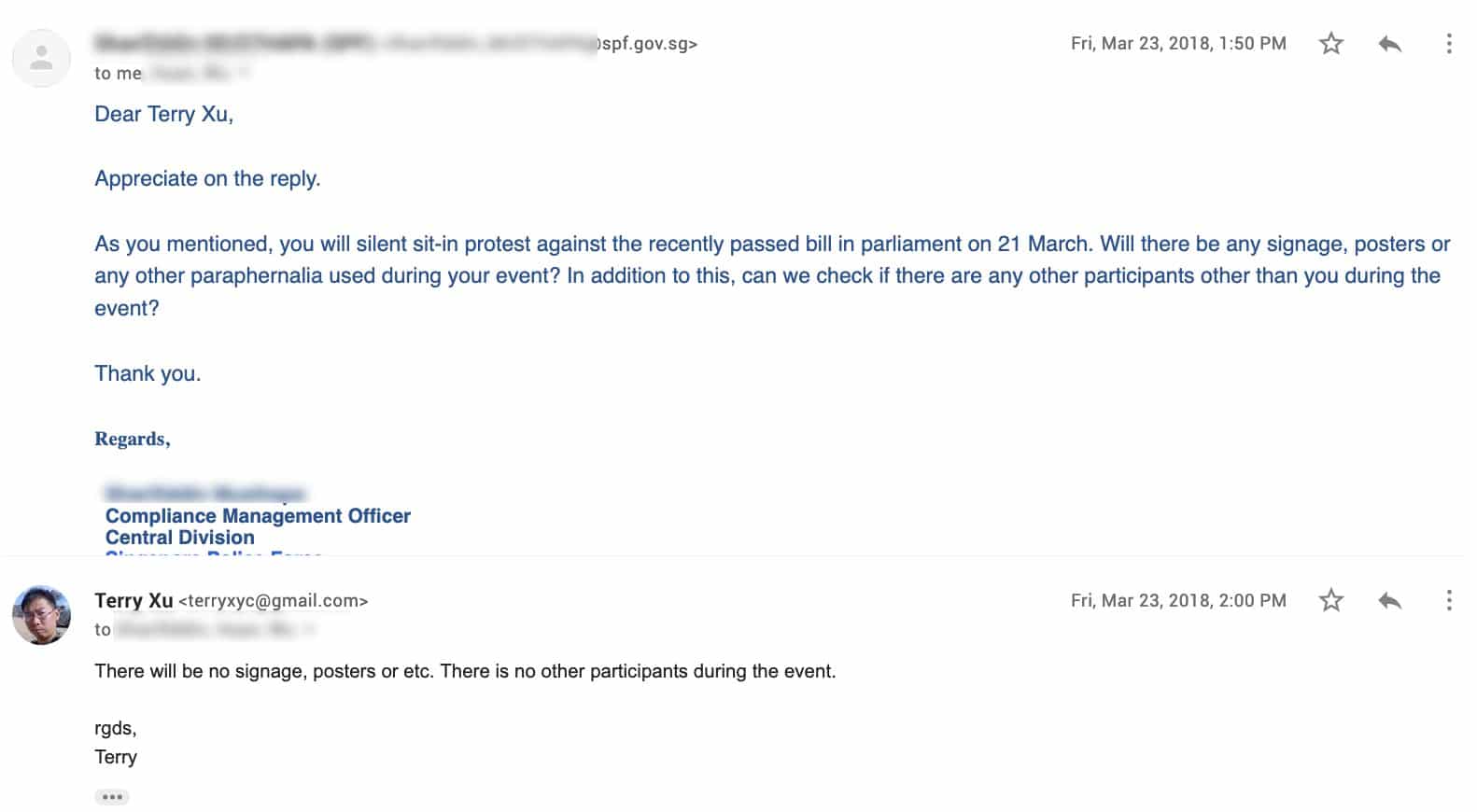 However, the police surprised me by replying that it has carefully assessed my application and take the view that the events applied for carry a risk of causing public disorder, as well as damage to property. It went on to suggest that the event can be held at Hong Lim Park instead as there is no need for police permit. The takeaway from the above documentation is that the police has no intention of ever approving any application filed by any member of the public.

The police does no service to itself by making pretenses that an application has a chance of being approved if it is reasonable, and should make it clear to the public that no public assemblies for any cause can be held outside of Hong Lim Park, as doing so anywhere else is illegal.