Speaking at the Institute of Policy Studies’ Singapore Perspectives conference, Minister for Trade and Industry, Mr Chan Chun Sing, reiterated that it is important to Singapore as a nation to strengthen its political system as it keeps “going, growing and glowing”.

The Minister declared that the operating political system should always be seen as a continuous work-in-progress with its policy to be able to change or stand through the test of time.

Mr Chan cautioned Singaporeans not to follow the footsteps of other countries where political systems become unreliable and calamitous for both the current and future generations.

The minister added that identification by race is becoming impractical as there are a growing number of intermarriages across different races and more Singaporeans are tying the knot with foreigners. This would result in a more diverse society.

According to Mr Chan, all these means leaders of the nation face a horde of difficult tasks and they should be ready to make “difficult but necessary decisions”, while anticipating that there are more challenges to come.

He underscored that the country must have “real political leaders and not just politicians”.

In a Q&A session following the Minister’s speech, People’s Power Party (PPP), Mr Goh Meng Seng asked of the possibility of making employment data publicly accessible. Mr Goh argued that most opposition members are accused of being “opportunists” as they do not own data.

To this, Mr Chan disclosed that though the data is necessary, it still would not be enough for meaningful discussions as people can always make many different interpretations. Illustrating his point, Mr Chan gave an example of the data relating to the ratio of Singaporeans to Permanent Residents. However, people made different interpretations and that only caused confusion.

Mr Chan concluded that the element of trust is essential when it comes to sharing data to either an entity or and individual.

“If people don’t trust you as a person, you can give as much data as you want and you won’t win over the hearts or the minds of the person,” said Mr Chan.

Over on social media, many netizens penned their dissatisfaction over what Mr Chan said in his speech. Writing in the Facebook pages of TODAY, The Straits Times, and Channel News Asia, Facebook users condemned Minister Chan’s speech as being obsolete with no substance. They added that he is commenting on issues that are not under his purview.

One user, Richard Chue, points out the irony in Chan’s speech. He asks whether Mr Chan, the Minister of Trade and Industry has usurped Minister of Manpower, Josephine Teo’s portfolio by talking about intermarriages.

Some online users also castigated the Minister on the ambiguous motives speech. They implied that the speech was extremely general without much thought.

Separately, Facebook netizen Mun Yong Wong pointed out that Mr Chan’s speech is a deliberate attempt to misdirect the public at large. He said that the Minister always “beat around the bush and answer a question with another question or changes the crux of the point”, instead of actually giving a proper answer. In fact, there are 4 others who share the same view that the Trade Minister is trying to deceive the public. 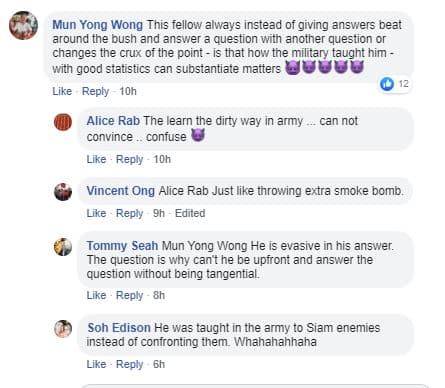 Similarly, Lai Voon Choong shares this belief regarding Minister Chan’s reluctance to be transparent with the public. 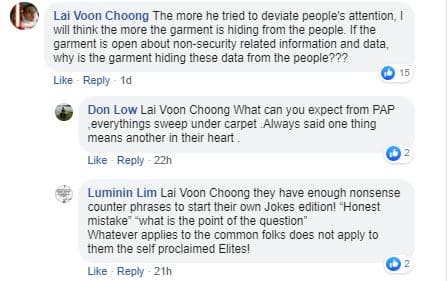 Reactions on matters relating to governance

As for matters relating to governance, netizens agree that there is no need for politicians to interfere in the domestic affairs of Singaporeans. They highlighted that politicians’ should first prioritize the people first and uphold the country’s interests, and not the party they’re attached to.

Meyer Tan’s comments “We don’t need politicians for Singaporeans. Politicians are for external affairs. What we truly need are leaders that place the interest of the country followed by its citizens”. 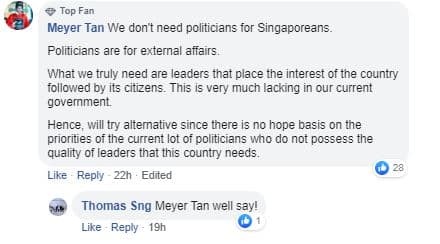 Reactions to matters of interracial marriages

In response to Mr Chan’s speech regarding the above, netizens implore as to why should anything be race-based. They indicated that generally, Singaporeans do not believe in race-based policies, as they are more concerned with matters of employment and job security. 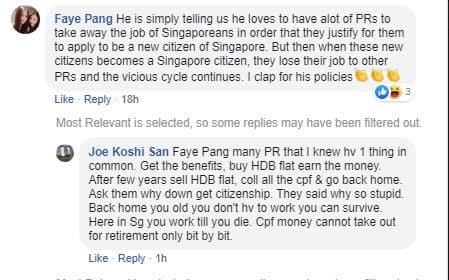 Asking the obvious, Jeff Ho said, “Why does policy have to be race-based? Malays need jobs, housing and retirement savings and so do Chinese, Indians and for that matter Muslims, Christians, Buddhists and atheists. This divide and rule policy has to go”, she says.

Reactions to the disclosing of data

A number of online citizens express angst at the government for not being transparent with its data. They highlighted their distrust with government data and its reasoning not to make data accessible to the public. Some say that failure to share data could lead to more fake news as people will attempt to guess the answers.

Singaporeans are displeased by the reluctance of the government in disclosing data. Netizens reason that by withholding data, it only suggests that there are many things to hide. They call for the release of all so called ‘classified information”.

Facebook user Danny Koh demands full disclosure on data in related to Singaporeans, New Singapore Citizens (less than 10 years), Permanent Residents and Foreigners. He says that this would allow citizens to make their own unbiased view based on the data. 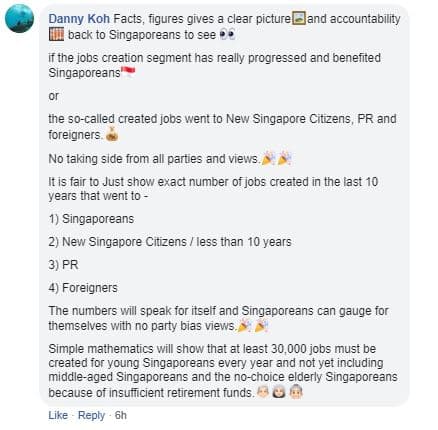 On the contrary, Facebook user Peter Andrew takes a rational approach. He admits that data transparency may result in different opinions but that could always be explained by the Singapore government.