The Ministry of Health (MOH) and the Singapore Food Agency (SFA) has finally revealed in a joint statement yesterday (17 Aug) that there has been an outbreak of typhoid fever in Singapore. The SFA is a new statutory board that comes under the Ministry of Environment and Water Resources headed by Minister Masagos.
As on 13 Aug, 15 typhoid cases were reported to MOH by local clinics. The number rose to 18 by yesterday in the span of 4 days.

The media interviewed Dr Leong Hoe Nam, an infectious disease specialist at Mount Elizabeth Novena Hospital and sought his views on the matter.
Dr Leong seems to put the blame on the complacency of Singaporeans. He told the media, “If the cases are local, it tells you that restaurants are doing a terrible job. If it is overseas imports, it could mean that Singaporeans are ignorant of risks when they travel and they need to be educated.”

However, Dr Leong may not be fair to pin the blame squarely on “complacency” of Singaporeans. Many foreigners do travel from their home countries to Singapore too to work here, and some may already have been typhoid carriers showing no symptoms.
According to Wikipedia, typhoid is caused by bacterium Salmonella. Symptoms usually begin 6 to 30 days after exposure. Information on Wikipedia also indicated that people may carry the bacterium without being affected; however, they are still able to spread the disease to others. It is spread by eating or drinking food or water contaminated with the feces of an infected person.

“Risk factors include poor sanitation and poor hygiene. Those who travel in the developing world are also at risk. Only humans can be infected,” it said. “Until an individual’s infection is confirmed as cleared, the individual should not prepare food for others.”
And according to US CDC, typhoid is common in developing countries. It is not common in industrialized regions such as “the United States, Canada, western Europe, Australia, and Japan”.
“Travelers to Asia, Africa, and Latin America are especially at risk, and the highest risk for typhoid is in south Asia,” CDC added. Indeed, according to this chart, the highest incidence rate for typhoid occurred in the Indian sub-continent: 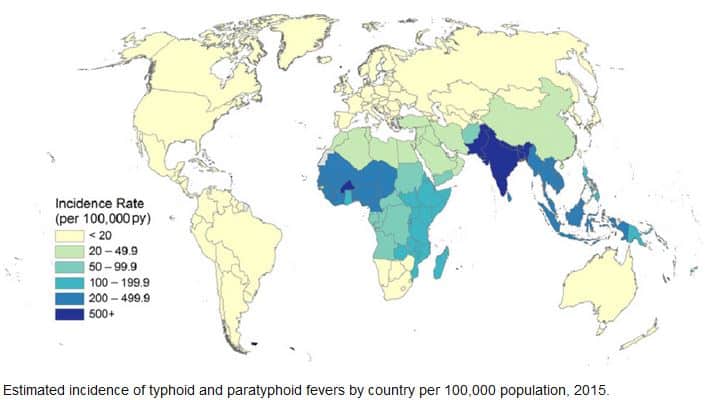 Typhoid test or vaccination not needed

Indeed, many foreigners have chosen to come to work in Singapore. The number of foreign workers on Work Permit, usually taken up by foreigners from 3rd world countries, now numbered 972,600 in Singapore.
According to MOH’s own statistics, of the 49 reported cases of typhoid in Singapore in 2015, 28 were foreigners with 26 of them working Singapore:

In terms of imported typhoid by country of origin to Singapore for the two years 2014 and 2015, the highest numbers came from countries in the Indian sub-continent which echoed with what CDC said above:

Yet, it is interesting to note that on MOM website, it said that foreign workers are only screened for 4 types of diseases: TB, HIV, syphilis and malaria. Typhoid is not mentioned here.
And on SFA website, it said food handlers, no doubt many are foreign workers these days, no longer requires to undergo mandatory typhoid vaccination and tuberculosis screening with effect from 27th September 2010:

It’s not known if the government would change its rules on typhoid test or vaccination for foreign workers in Singapore, especially in view of the recent typhoid outbreak and the death of Sats officer Fadli Salleh last year after consuming contaminated food prepared by Spize restaurant.
There were seven food poisoning incidents linked to the Spize River Valley outlet between Nov 6 and 9 last year, which led to 82 falling ill. Salmonella typhi was found from blood and stool samples of those who fell ill, as well as in the raw and ready-to-eat food and environmental samples taken from the outlet.
Unfortunately, Mr Fadli died. Perhaps the government would only act if the loved ones of Manpower Minister Josephine Teo, Health Minister Gan or Environment and Water Resources Minister Masagos also die from typhoid?

Statistics that keep getting better?