The government has given notice that it would be starting a new programme to get more foreigners to work in Singapore on Employment Pass (EP), which does not carry any quota limitation. Currently, the minimum qualifying salary for EP is $3,600, only $100 more than the median pay of $3,500 for fresh graduates in Singapore.
The government started announcing on Tuesday (30 Jul) through Economic Development Board (EDB) and Enterprise Singapore saying that foreign PMETs looking to work in Singapore as “core team members” of technology companies might have more flexible requirements over the application of their EP.
The 2 government agencies will help “facilitate” easier entry of foreign PMETs to become “core team members” of technology companies operating in Singapore. That is to say, it’s only meant for the tech industry.
But 2 days later on Thursday (1 Aug), Trade and Industry Minister Chan Chun Sing suddenly told Bloomberg that the two-year programme which was planned to entice foreign tech talent to Singapore may be opened to other industries, apart from the technology-driven ones. In other words, this special programme to “facilitate” easier entry of foreign PMETs on EP would be opened to all industries.
Chan said that he is all set to extend the programme to other fields, without actually naming the areas. “Singapore has never limited top talent coming into Singapore,” Chan said. “These are not people competing with the average Singaporean, these are the people who are competing for Singapore.”
Singapore’s education is top in the world
Many netizens have been questioning what has happened to our education system which is supposed to be top in the world. Many are asking despite having a top education system in the world, why can’t Singapore produce our own talents and why the government needs to constantly import foreign ones.
Indeed, according to a 2016 BBC report, Singapore has the highest achieving students in the international education Pisa rankings, with its students coming top in tests in maths, reading and science (the next Pisa results would be released in Dec this year).
The influential Pisa rankings, run by the OECD, are based on tests taken by 15-year-olds in more than 70 countries. OECD education director Andreas Schleicher praised Singapore that it was “not only doing well, but getting further ahead”.
Singapore came in first place in all the Pisa test subjects, ahead of school systems across Asia, Europe, Australasia and North and South America.
The OECD Pisa tests taken every three years, have become increasingly influential on politicians who see their countries and their policies being measured against these global school league tables.
“So why is Singapore so successful at education?” BBC asked. “Singapore only became an independent country in 1965. And while in the UK the Beatles were singing We Can Work It Out, in Singapore they were really having to work it out, as this new nation had a poor, unskilled, mostly illiterate workforce.”
“The small Asian country focused relentlessly on education as a way of developing its economy and raising living standards. And from being among the world’s poorest, with a mix of ethnicities, religions and languages, Singapore has overtaken the wealthiest countries in Europe, North America and Asia to become the number one in education,” BBC added.
And when comes to tertiary education, Singapore’s universities are world-class as well. According to a news report 2 months ago (Jun 2019), Nanyang Technological University (NTU) and National University of Singapore (NUS) are now jointly ranked in the top spot in Asia in the Quacquarelli Symonds (QS) World University Rankings, which is read by educational institutions and governments.
Globally, NUS and NTU are ranked 11th jointly in the world, beating even many prestigious Ivy League universities in America: 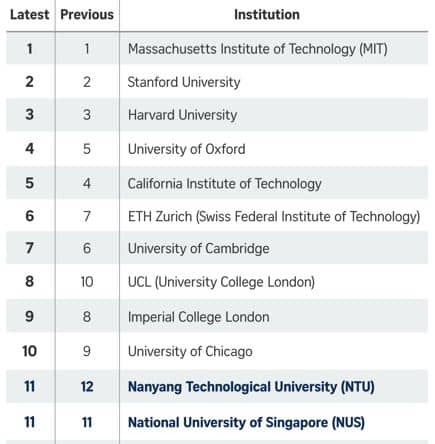 Singapore ranked 13th in world having best developers
Even in the area of computer programming, Singaporean coders are doing well too. According to a study published by HackerRank three years ago, Singaporean coders were ranked 13th in the world globally. It was a study to see which countries have the best developers.
HackerRank is a popular free coding practice website that allows developers to hone their coding skills by solving challenges. Based on the speed and accuracy with which people finish the challenges, HackerRank has ranked 1.5 million developers coming from all over the world.
Singapore came in a respectable 13th:

Incidentally, despite the much touted prowess of Indian programmers, especially those working in the IT sector of Singapore, India was ranked a mediocre 31st position, worse than the rankings of Vietnam, Chile and Turkey.
In any case, Chan and his 4G PAP leaders appear to favour foreign talents over the local ones, by his call to extend the special EP scheme to all industries soon.

The Right to Legal Representation in Death Penalty Cases: A Resolve Not to be Stifled