It was recently reported in the media that a young Singaporean in his late 20s lost his engineering job and was unable to secure another job.

Feeling hopeless, he holed himself up at home, mostly playing computer games and eventually developed the “hikikomori” syndrome.

The term “hikikomori” was coined by Japanese psychologist Tamaki Saitoō in the late 1990s, referring to those who experience physical isolation, social avoidance and psychological distress for six months or longer. There are often underlying psychological tendencies, such as low self-esteem and perceived social rejection, said Singaporean researcher Liew Kong Meng.

As a result, the Singaporean man did not leave his house for 3 years and became a social recluse. He would even cut his own hair so as to avoid going out for haircuts. All these while, he was supported by his wife, who worked as a clerk.

Eventually, his wife got fed-up and divorced him last year.

On the other hand, other young working Singaporeans who lost their job and couldn’t find one end up driving Grab.

Last month in Parliament, Transport Minister Khaw Boon Wan was asked to disclose the breakdown of the current number of taxi drivers and private hire car drivers by their respective age groups. Minister Khaw replied that as of February this year, there are about 41,000 Private Hire Car Driver’s Vocational Licence (PDVL) holders and 99,900 Taxi Driver’s Vocational Licence (TDVL) holders.

The age breakdown is as follows: 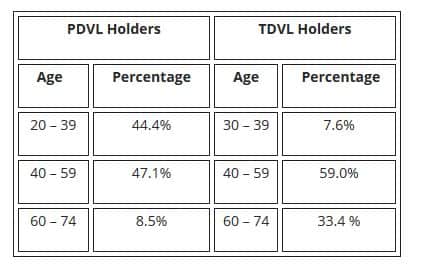 In other words, some 44% of licensed private hire car drivers fell into the age group of 20-39 years old.

Shaun Ow, 39, was working in the private sector for some 11 years in various industries before he was retrenched 4-5 years ago. He then tried to find a job for more than a year before giving up. He ended up driving Grab to make ends meet.

He told the media that he has been a private hire car driver for the last three-and-a-half years and manages to earn about $5,000 a month, after accounting for rental, fuel and other miscellaneous charges. But he has to work very hard, driving everyday for 12 to 14 hours non-stop. On average, he would be making 20 to 25 trips daily.

“Passengers sometimes think our job is easy – sitting in an air-conditioned environment is easy. But I always tell them: You find one weekend, have two one-hour breaks for lunch and dinner, and sit in a comfortable sofa for 12 hours just watching TV. You will feel sore backs, sore shoulders, sore necks, sore everywhere,” he said.

“We always have to be alert, vigilant (of) traffic. We can be very careful, but traffic is always moving with motorists, pedestrians and now with PMDs (personal mobility devices) – that is a lot of grief.”

Prof: How come pay of our diploma holders with specialized training worse than those achieved by ‘gig’ economy workers?

Prof Walter Theseira, an economist at the Singapore University of Social Sciences (SUSS), noted that the take-home pay for private hire car drivers is “competitive” with the many entry-level jobs for educated younger workers.

But he said that having a large number of young people driving Grab for the long term raises some issues.

“If workers are attracted to private hire driving and other ‘gig’ economy jobs and spend too long in them early on, their lifetime wages and career opportunities could be harmed significantly.”

“What we should really think about is why many of the jobs that employ our NITEC and poly diploma holders pay comparably or worse than the earnings achievable by gig economy workers. This doesn’t make any economic sense because NITEC and diploma holders actually have extensive training to perform a particular skilled job,” Prof Theseira further noted.

“These are workers who have received two to three years of specialist training. Why does the market pay them the same or less than a gig economy platform does for a job that requires virtually no training whatsoever?”

Actually, Prof Theseira doesn’t need to look far for an answer. It is embedded inside the MOM data:

Because the market can get cheaper “foreign talents” to work in companies, helping to depress the salaries of our NITEC and poly diploma holders even if they have received two to three years of “specialist training”. As an economist, Prof Theseira should be quite familiar with the concept of demand and supply.