A man named Ruzaidie Dar Surnik got a shock of his life when he recently found out that five strangers, all foreigners, used his residential address and registered it with the Ministry of Manpower (MOM).

Revealing this news last Thursday (18 April) on his Facebook account, Ruzaidie said that he got to know about this matter after his neighbour, Bets Koh, alerted him via a WhatsApp message. She asked him to check the MOM’s website and see if there’s any foreign worker who used his address as their residing address without his knowledge.

His neighbour highlighted that many residents in their neighbourhood had encountered this same problem.

Listening to her advice, he went on to the website and was surprised to see not one, but five foreign workers from different companies were declared using his address as non-residents. 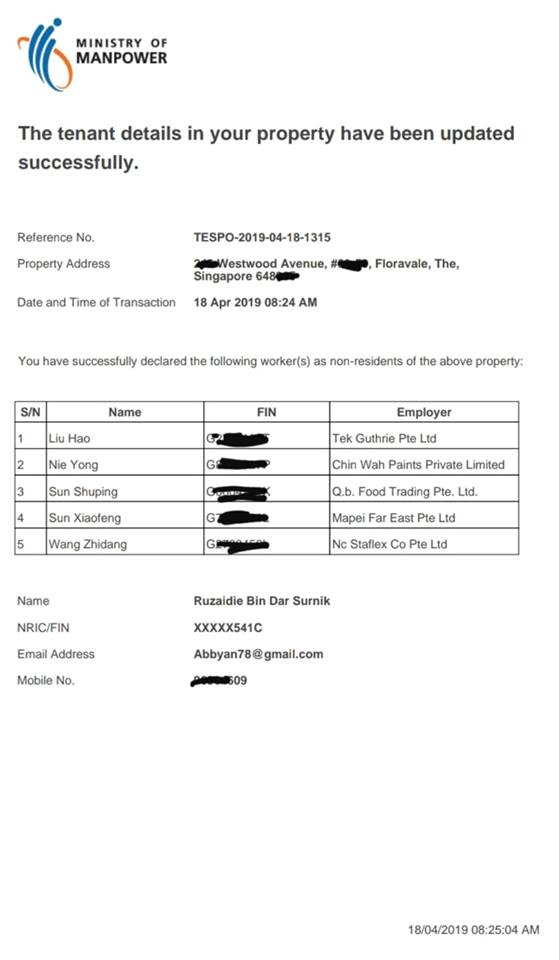 “What if they made an illegal loan with a loanshark? What happened if they had done something wrong and out of the sudden the police came standing in front of our house?” he wrote.

Upon learning about this, the Singaporean told TOC that he immediately reported this matter to MOM and asked how this could possibly happen and raised his concerns to them.

“As communicated, please be assured that MOM takes a very serious view of this matter and will be conducting investigations against the parties involved for possible false declaration offences. We will also tag your address from being used for the registration of foreign worker address,” said a MOM spokesperson in an email reply.

When TOC asked the resident on his thoughts about this matter, he told that he hopes that MOM will look into this problem seriously and tighten their registration procedure like having a system where the house owners will receive a notification if someone registers their address with MOM.

Ruzaidie also emailed the respective companies of these foreigners to inform them of this problem. At the time of writing, two of the companies have responded to him and said that they will investigate this matter with the affected foreign workers, he revealed to TOC.

Following his encounter, the Singaporean urged everyone to check the website and inform MOM if they experience similar situation like his.

If that is not all, in the comment section, Ruzaidie also said that he “believes there’s a loophole” in MOM’s system that allows anyone to use another person’s address to register in the system. He added that the system is “flawed” and the problem surfaced because MOM does not “have a check and balance in the system”.