New petition on Change.org calls out for the system “to be fair and just to Nicholas too”

The recent ‘Peeping Tom’ scandal at National University of Singapore (NUS) is starting to gain widespread attention, with more and more people voicing out against perpetrator Nicholas Lim for receiving a mild punishment from the university after he was caught filming a fellow student, Monica Baey while she was showering.

However, an online petition initiated by Gary Yeow on Change.org just two days ago (22 April) is calling out for the support of Mr Lim’s verdict with a goal of 100 signatures. Presently, it has managed to round up more than 30 signatures.

“The system has to be fair and just, it can’t be the more vocal ones get disproportionately more say over the rest…,” Mr Yeow wrote at the start of the petition.

“NUS did no wrong as this system has been practiced all along. To single out Nicholas for special treatment is manifestly unjust…,” he said after pointing out that the current punishment meted out to Nicholas is based on precedent cases and through the board of discipline.

He also mentioned the “second strike and you are out” policy set by NUS for sexual misconduct cases and quoted a statement by NUS Vice-Provost (Student Life) Florence Ling in The Straits Times which justifies this policy.

Ms Ling stated: “For first-time offenders, because we are an educational institution, we want to give the students a chance. Student offenders who appear before the Board of Discipline for the first time are given a range of punishments, but not immediate expulsion.”

One of its commentators, Tan Lim, agreed with Mr Yeow’s petition. He rhetorically expressed that the case should not be one-sided and that Singaporeans should have more “empathy” and “forgive others” to “save the terrible (Singapore) society”.

Another response to the petition by Ashura Chia was also in support of the statement that they “have to be fair to both parties, not the one who is more vocal.” In her opinion, “the online vigilantism is getting out of hand and tantamount to cyberbullying”. 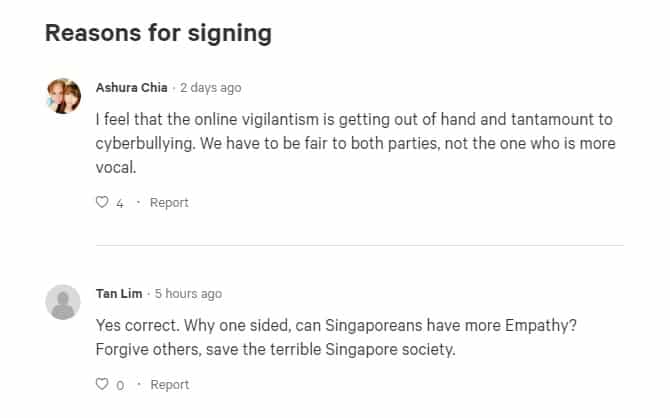 Online petitions have been making its rounds; one on Change.org seeking for a stiffer punishment, specifically addressed to the NUS heads, has currently gathered over 37,000 signatures so far while another Change.org petition requesting for further police investigations had collected about 16,000 signatures and counting.

Meanwhile, a statement was also signed by almost 500 NUS students regarding the university’s approach towards sexual harassment cases and appealing for Ms Baey’s immediate redressal.