Why is it that private property prices are going up, whilst HDB prices are still going down?

The former states that “Private home prices rose 3.9 per cent in the first quarter of this year, according to the latest figures from the Urban Redevelopment Authority (URA) on Friday (Apr 27).

This continues an upward trend after the 0.8 per cent increase seen in the previous quarter.” 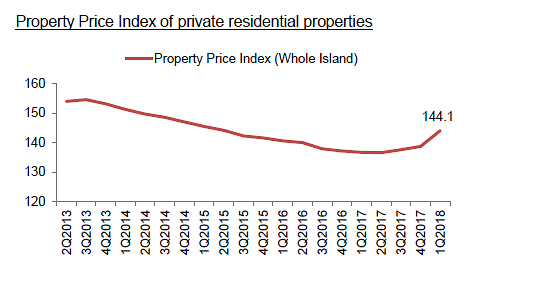 The latter states that “Resale prices for flats continued falling in the first quarter, with the resale price index declining 0.8 per cent from the previous quarter, according to public housing data released on Friday (Apr 27).”

Both HDB resale and residential private property prices have been going south from around the second quarter of 2013.

However, whilst private property resale prices have rebounded by about 10 per cent from around September last year – HDB resale prices continue to fall.

So, why the apparent deviation now?

Has it got anything to do with Singaporeans realisation that older HDB flats may be declining in value rapidly to zero at the end of the typical 99-year lease?

In March 2017,  Minister for National Development Lawrence Wong warned members of the public to pay attention and be realistic when buying old flats, especially in relation with the Selective En bloc Redevelopment Scheme (SERS).

In his Facebook post, the Minister reminded buyers that SERS only offered to HDB blocks located in sites with high redevelopment potential, which are typically sites where the land has not been well utilised. It is also subject to the availability of suitable replacement sites.

“The Government will continue to maintain this strict selection criteria,” he wrote.

Dare to be different

ILO, Tokyo 2020 sign agreement to promote decent work in run-up to the Games