Minimum sum continues to increase to $181,000 while PMETs are being retrenched

According to a new update on CPF website, the new Minimum Sum (or newly termed as Full Requirement Sum) is now mandated to be $181,000 for those who turned 55 in the year 2020: The government has said that the Minimum Sum needs to be increased yearly to take into account of inflation. However, the increase appears to be not following exactly according to the rate of inflation: 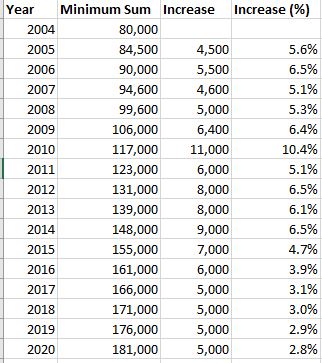 Indeed, the govt has been actively putting out words to “assure” the public:

But such words give scant comfort to those who have been retrenched especially among the older PMETs, who have to take on lower paying jobs like driving a taxi or selling insurance or properties just to make $2 to $3K a month.

For example, former GM from the oil and gas industry, Mr Long Khin Keong, used to earn $15,000 a month. These days he takes eight months to earn that much as a taxi driver. He has been struggling to find a suitable job.

“Hopefully somebody ‘up there’ reads this and improves the predicament of many like myself,” he told Straits Times in an interview. “I’m not asking to become a GM again, I just want to be somewhere I can contribute with my experience.”

Another person interviewed was Mr Desmond Tan, who was once the head of Asia sales at a European bank. He used to earn more than $25,000 a month, but now has to settle for commissions of about $3,000 as a property agent.

After he was retrenched, he tried to get a job back in the banking industry but was turned away from bank to bank. Some even told him that he was “over-qualified” for the positions they were offering, given his over two decades of experience.

“I used to deal with money that numbered in the millions,” Mr Tan said. But now his fees come only in the hundreds.

Both Mr Long and Mr Tan are not alone in joining the group of PMETs who had earned good salaries before they were retrenched. And now both are struggling to make a decent living given that they have a family to take care of.

In this regard, CPF confirmed with ST that even though they do provide data for re-employment rates, they do not track the difference in wages for the new jobs.

At the current rate of increase in Minimum Sum, it would end up as $321,000 in 2048. This is assuming that the person is 25 years old and starting out to work this year. He would then hit 55 at 2048. In his next 30 years of working, he must also pray that he would not be replaced and end up driving taxi or selling properties or insurance with a significantly lower pay like Mr Long and Mr Tan.

PrevPreviousIllogical reason for cancellation of seniors’ off-peak passes
NextK Shanmugam raises possibility for deferred prosecution agreements for corporate offencesNext
We have a small favour to ask from our supportive readers. TOC is Singapore’s longest surviving alternative media website and we are attracting new readers everyday. TOC’s independent, investigative journalism takes substantial time, money and hard work to produce. Not to mention the same amount of resources to defend ourselves from the persecution. But we soldier on because we believe in the value of our work and your right to information. TOC is editorially independent. We set out own agenda, free from commercial bias, undue influence from billionaire owners, millionaire politicians or shareholders. If everyone who reads our reporting, who likes it, helps to support it, our future would be much more secure. For as little as USD1 a month or subscribing to us, you can support our work and consequently preserve the sanctity of press freedom. We appreciate your valued help and it means more to us than you can ever imagine!