Singapore Mass Rapid Transit (SMRT) tweeted on Saturday (7 October) at 5.39 pm that its North-South Line (NSL) is experiencing delays due to a track fault, adding that it is not related to the new signalling project.

It also added that there was no train service between Ang Mo Kio and Toa Payoh due to a track fault at Bishan.

It was later made known through the media that train services on the North-South line were affected by flooding in the tunnel from Bishan to Braddell MRT stations.

SMRT asked the commuters to consider alternative forms of transport.

SMRT then tweeted that there are no train services between Ang Mo Kio and Marina South Pier, asking commuters to seek alternative modes of transport.

Following that, they added that they were in the midst of restoring its services.

This is not the only delay that occured today. The North-East Line (NEL) also experienced delays due to a track fault earlier this afternoon.

Upset, many took to social media to complain about long wait times and a lack of shuttle bus services.

Ms Fzas also asked SMRT to turn on the air conditioning as it was very hot inside the train.

Mr Rukx stated that there were no officers to guide commuters at the platform.

Many also asked about the northbound service and why there were no announcements made about it initially.

Mr DiMing asked SMRT to inform the public about the delay on its Facebook page.

Some trains were reportedly moving with doors opened, while others were refusing to open doors to alight passengers.

Mr Jay Tee asked how such a thing could happen as the area had experienced worse rain before.

Some posted the picture of announcements made on the platforms. 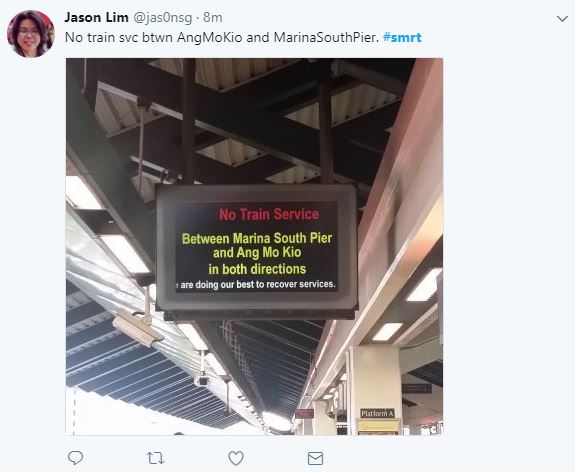 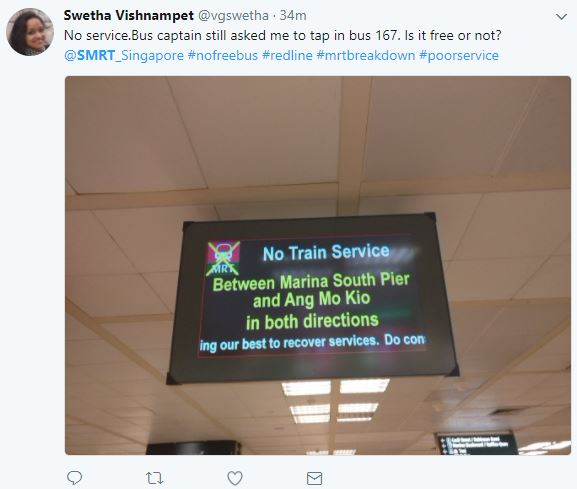 Mr Hadi ABdul posted a video of the situation at the station.

Here's the short queue we have to face while you sort things out pic.twitter.com/FaUaB0U1S4