SMRT : no train service in both directions of BPLRT

The Singapore Mass Rapid Transit wrote that there is no train service on the Bukit Panjang Light Rail Transit (BPLRT) system from BP1 to BP6 stations in both directions at 11.05 am on 28 September.

It said that the outer loop services are not running. However, the inner loop are still operating. Its engineering staffs are investigating the matter.

50 passengers were detrained about 20 metres from Choa Chu Kang station at 10.32 am. Around an hour later, SMRT announced that services on the BPLRT network will be temporarily suspended in stages, starting with Choa Chu Kang to Bukit Panjang stations in both directions due to urgent inspections on both the BPLRT train cars and track network. This allows its engineers time to thoroughly assess the track network.

It said that a signal rail joint on the BPLRT network was damaged yesterday evening which caused damage to the current collector devices (CCDs) on the BPLRT train cars as they moved over the damaged rail joint. At 1.50 pm, SMRT posted another announcement on its Facebook which said that services on the BPLRT inner loop has resumed since 1.20pm, with four trains currently serving commuters.

Further inspections are still being conducted and it hope to resume full service before evening peak.

SMRT updated that four trains are currently serving the inner loop from BP6 Bukit Panjang to BP13 Senja as of 4.12 pm on 28 September.

Its engineering staff are still on the outer loop tracks. In addition, it was running a test train on a section of the core route track from BP1 to BP5 stations.

The intention is to fully resume Service B after the engineers have thoroughly checked the tracks. At the mean time, free bus and bus bridging services are available along the entire BPLRT network. 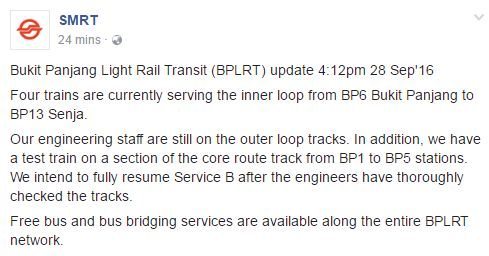 At 5.45 pm, Service B on the BPLRT has resumed. SMRT said that the BPLRT services would be free to all commuters until the end of service today as well as free bus services and bus bridging service.

The disruption started late at night at around 10 pm on 27 September when SMRT first tweeted about the fault.

Around two hours later, it tweeted that the service were finally running normally.

Around five hours later, SMRT announced another power fault. Therefore, there was no train service and passengers were asked to expect 30 minutes delay. It provided free bus service and free bridging bus services.

One hour later, the service had commenced. Passengers could still take the free regular and free bridging bus services.

However, the service was degrading and passengers were asked to expect longer travelling time.

At around 9 am, SMRT said the service was available. Therefore, the free regular and free bridging bus services have ceased.

At around 6.50 this morning, SMRT posted on its Facebook page that the Bukit Panjang Light Rail Transit (BPLRT) was running only six trains, half the usual number, at morning peak today due to a track fault yesterday evening which damaged the current collector devices (CCDs) on 15 trains.

SMRT said that it had deployed engineering staff to work through the night to assess and rectify the fault. Initial investigations show that a damaged rail joint detached the CCDs on trains which passed the damaged joint which led to delays last night from about 10pm until end of service as engineering staff sought to find the cause of power trips while the service was running.

The damaged trains are now at the BPLRT depot at Ten Mile Junction. However, there were no much complaints from netizens. One of our readers said that the breakdown has become a routine and people do not need to panic.

Another reader said that he did not receive any broadcast alerts from LTA this morning. The reason might be because the company did not want to cause panic.

This is a developing story. Please, refresh for more updates.