On 23 August 2016, Agri-Food & Veterinary Authority of Singapore (AVA) released a statement which said that it has worked with the importer of “Just Drink – Milk Tea” to recall the product, as it contains the ingredient L-theanine.

The statement said that L-theanine is currently not on the list of permitted food additive under the Food Regulations of Singapore.

There is no food safety risk associated with the products, therefore consumers who have consumed this product and have any health concerns can consult the doctor or seek medical advice. 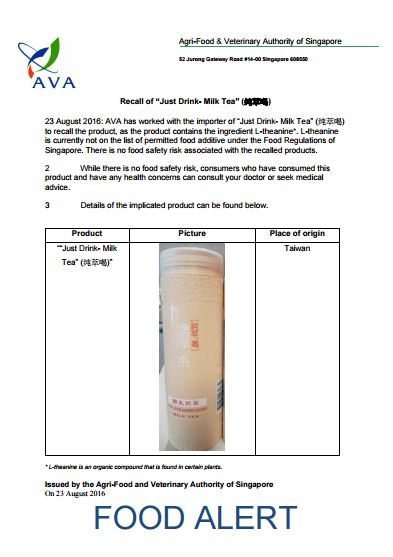 Singaporeans have been crazy over this Taiwanese drink (originally named Chun Cui He 純萃。喝), which packaged in bottles that similar to shampoo containers.

There are two flavours of the drink, latte and milk tea, and it is sold in 7-Eleven islandwide. The product is in a very high demand, that despite the fact that each costumer can only buy maximum 6 bottles, the stores are almost always running out of stocks.

The 275 ml drink costs $2.80 each. Although due to the high demand of the product, some opportunists sell the drink for $5 each on Carousell.

L-Theanine is a relaxing and nondietary amino acid found pretty much exclusively in teas from Camellia sinensis (alongside Green Tea Catechins and Caffeine) and is known to promote relaxation without sedation.

L-theanine was discovered as a constituent of green tea in 1949 and was approved in Japan in 1964 for unlimited use in all foods, including chocolates, soft drinks, and herb teas, except infant foods. It also provides a unique umami (brothy or savory) taste and flavor to green tea infusion.

In the United States, L-theanine is sold as a dietary supplement and has been granted GRAS (generally recognized as safe) status by the Food and Drug Administration.