Without “natural aristocracy”, society “will lose out”: Lee Hsien Loong

At a dialogue on Friday, Prime Minister Lee Hsien Loong was asked if what Singapore needed for its economic future was “a culture of a lack of respect for or challenging authority”, as in other countries.

The question was posed by the host of the forum, Washington Post columnist, Fareed Zakaria, at the “Singapore at 50: What Lies Ahead?” dialogue organised by the Institute of Policy Studies.

Dr Zakaria said that countries such as the US, Sweden and Israel have been dominant in innovation, science and technology. He noted that the common underlying thread in these countries was “a culture of a lack of respect for or challenging authority.”

“You spent six hours yesterday in a court trying to do this, to instil a culture of respect,” Dr Zakaria said. “And isn’t it exactly the opposite of what you need for your economic future?”

In his response, Mr Lee, who was testifying in court on Thursday in his defamation suit against blogger Roy Ngerng, said:

“You want people to stand up, not scrape and bow. But if you don’t have a certain natural aristocracy in the system, people who are respected because they have earned that and we level everything down to the lowest common denominator, then I think society will lose out … If you end up with anarchy, it doesn’t mean that you’ll be delivered with brilliance.”

It is a curious phrase which Mr Lee used.

“Aristocracy” is defined by some as:

Indeed, some disagreed with the PM. 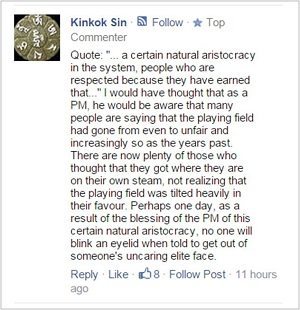 Mr Lee’s remarks of the need for a “natural aristocracy” seem reminiscent of what former minister George Yeo said in 1996, where he reminded Singaporeans to “remember your place in society before you engage in political debate”.

A month before the general elections of 2011, Mr Lee had advised his party members that they were “servants of the people”.

“Never forget we are servants of the people, not their masters,” he said. “Always maintain a sense of humility and service. Never lord it over the people we are looking after and serving.”

It is thus not entirely clear what Mr Lee, whose father was the late Lee Kuan Yew, himself the founding prime minister of the country, meant by “natural aristocracy” in the context of Singapore.

Whatever it is, at the end of the day, it is not what we call it but how dedicated our leaders are to serve which matters.