21 things S’pore is “not ready” for under the PAP

On Thursday, Prime Minister Lee Hsien Loong regurgitated his position that Singapore may not need too many opposition Members of Parliament. He was reported to have said that “democratic progress [is] not about number of opposition MPs in Parliament.”

Mr Lee’s remarks, made in an interview with reporters, are nothing new.

He had in the past said, referring to any increase in the number of opposition MPs in Parliament, that he would have “to spend all my time thinking what’s the right way to fix them, to buy my supporters vote.”

Mr Lee had also argued that Singapore was “not ready for a two-party system”.

Indeed, under the People’s Action Party (PAP), of which Mr Lee is secretary general, Singapore seems to be “not ready” for quite a number of things.

In his interview on Thursday, he also said Singapore is “not ready” for same-sex marriage, clearly a reference to what had happened in Ireland two weeks ago where an overwhelming majority in the mostly Catholic country voted in support of gay marriage in a referendum.

Here are 21 things which Singapore under the PAP is apparently “not ready” for: 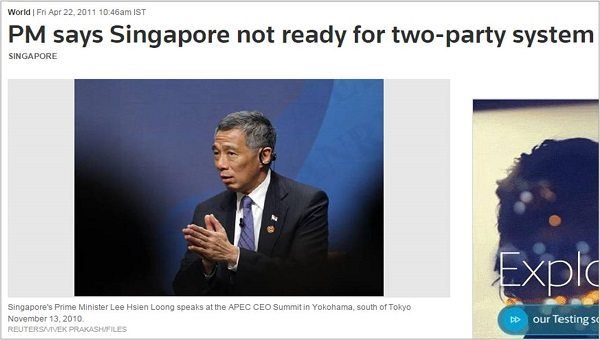 3. Non-ethnic Chinese PM – because, PM Lee says, “you have to win votes”, implying that a non-Chinese PM would not be able to “win votes”. This, however, would mean it is the political party (such as PAP) which is not ready for a non-Chinese PM, and not Singapore or Singaporeans.

4. Cabinet papers – because, Minister Lawrence Wong says, it “may not lead to better outcomes.”

5. Yale-NUS campus protests – because, as Yale English professor Pericles Lewis said in an interview, “the new campus plans to nix political protest in order to comply with Singaporean law.”

“We won’t have partisan politics or be forming political parties on campus,” Lewis told The Wall Street Journal. “In terms of organized protests heading off campus, they would have to obey Singaporean laws.”

6. Children’s penguin book – because, the National Library Board says, the books “don’t promote family values” and that it “takes a strong pro-family stance in selecting books for young ones.”

The two books were later reinstalled, but in the adult section of the library. 7. Archie Comic– because, the Media Development Authority (MDA) says, it found the “content to be in breach of guidelines because of its depiction of the same sex marriage of two characters in the comic.” 9. “To Singapore, With Love” – because, the MDA says, “the film undermine national security.” 10. Ken Kwek’s film, “Sex, Violence and Family Values” – because, the Films Appeal Committee under the MDA says “racial references employed in the film are indeed offensive to the Indian community.”

The film was later allowed to be screened, after the producers appealed, with edits made and was rated “R21”. 12. A-Mei’s song – because, the MDA says, the performance of the song was to be held “outdoors”, and “makes it difficult to” provide advisories for the public. 13. Jolin Tsai song and video – because, the MDA says, the song “contains lyrics on homosexuality which we consider to be in breach of the Radio Programme Code and therefore unsuitable for broadcast.” And in other areas, Singapore and Singaporeans are deemed:

14. Not ready to have babies – because, a survey of 600 people found, of “financial concerns”, and “that they are not emotionally prepared to have children as well.” 15. Not ready for Gen Z workers – because, a survey found, Gen Z members have “a desire or greater work-life balance, increased workplace flexibility and more rapid advancement opportunities, as their main demands.”

16. Not ready for beer ladies at hawker centres – because, the National Environment Agency (NEA) says, “this could lead to touting amongst the various drink stalls”, which “may give rise to disamenities, such as touting and possible harassment of patrons when promoters compete for business.” 17. Not ready to consume alcohol in public – because of “complaints about drunkenness in public places.”

18. Not ready for retirement – because a survey by DBS Bank found that a “majority of Singaporeans do not have a financial plan for retirement, are afraid of planning ahead and need more than they estimate to retire.”

19. Not ready for shisha – because, the Ministry of Health says, in view of the health risks associated with shisha smoking and to prevent the proliferation and entrenchment of shisha smoking in Singapore. 20. Not ready for an ageing society – because, PM Lee says, of societal attitudes, infrastructural needs and expectations which need to be enhanced. 21. And finally, Singapore is not ready to allow the use of the late Lee Kuan Yew’s name and image without permission – because of “public concerns”, says Minister Lawrence Wong.