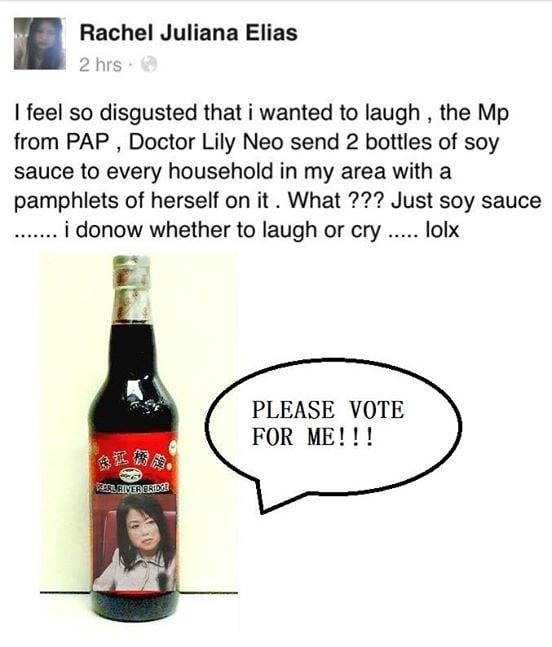 Just last evening,  a Facebook page, “Talk Cock Singapore” posted an image of a comment by a person named Rachel Juliana Elias, and in the comment, she claimed that Member of Parliament, Dr Lily Neo had sent out bottles of soy sauce to residents with pamphlets of her portrait on it.

The Facebook page shared the comment along with an image of a soy sauce bottle with Dr Lily Neo’s portrait on it, with the caption “Please vote for me!!!”.

It is noted that Rachel’s original comment did not have any image posted along with it.

The picture in the Facebook posting was clearly photoshopped to accompany the comment by Rachel. A search on the internet gives us the original image of “Pearl River Bridge Superior Dark Soy Sause” which the member of parliament had her portrait superimposed on. The post was shared close to a hundred times on Facebook and commenters were either convinced or somewhat skeptic that a MP would resort to such means of publicity.

Purportedly, MP of Tanjong Pagar GRC, Dr Lily Neo was notified of this posting and responded on her Facebook status to clarify the issue brought up by this resident.

“There might be some misunderstanding or misinformation. Over the years, I have never given out any soy sauce to my residents. In fact, I always try to render as much practical assistance as possible.

In the case of Rachel, I have assisted Rachel Juliana Elias by providing free private school transport (paid for with private funds raised personally) for her children to go to school. My intention is always to provide the best assistance wherever possible.

We also provide free comprehensive day care for her children at her door step called CATCH Plus at Jalan Kukoh. Last few days I also sent her and other residents there an invitation to attend our roadshow today when we have many Government agencies at Jalan Kukoh to assist with job placement, financial needs, childcare needs , HDB and Town Council issues. I want to assure Rachel I didn’t send the soy sauce”.”

She added in her comments that she thanked those who have put in kind words for her and hope that her clarification would help to explain any misunderstanding and misinformation to her residents.

Rachel responded with a short liner, ” If that is the case, please check with the volunteers who send out the goods.”

She subsequently commented on Dr Lily Neo’s status to clarify her claims.

“I am not lying what I have found outside my home. And I’m clarifying the truth. I am curious as to why we residents were given a small paperbag with 2 bottles of Chinese soy sauce and a packet of biscuit. It is also the same when u went door to door to meet residents. We Malays don’t take Chinese soy sauce, often I gave it away to Chinese neighbours, even they don’t want it sometimes. Now I wonder why its two bottles of coke with a pamphlet of Lilly Neo herself on it . As for the assistance rendered to my children, I am not sure if it’s ongoing . For what i know , when the children separated from the parent, or no longer stays in one household , they deducted or cancel of the assistance given. And I seldom go to the MP unless emergency .” (edited for spelling)

Many commenters on Dr Lily Neo’s status update lambasted Rachel for being ungrateful despite the assistance she receives from the MP.

In response to the reaction by her supporters, Dr Lily Neo wrote, “Let’s not be too harsh on Rachel. I will continue to do my best to assist my residents who are in need. On Rachel’s case, I will continue to assist her and her children including free private school transport and free comprehensive day care at CATCH Plus.”