I witnessed the death sentence being passed

Michael Anak Garing , you are hereby sentenced to be taken from here to a lawful prison (and then to a place of execution) where you shall be hanged by the neck until you are dead.

As these words were read out by the Judge on a sombre Monday morning, the court stood still. For the accused and his loved ones, even time stood still.

Lawyers, defendants, and loved ones usually listen very intently to the words of a judge as soon as he asks the accused to rise. Ears perk up, fists are clenched and bodies lean forward – all in the hope that the judgement would be one that is favourable to them.

As far as I know, the death sentence is the only sentence where the entire courtroom would know the outcome even before the judge reads his judgement. This is because before a sentence of death is to be passed, everyone in the court room must rise.

I witnessed first hand Michael sentenced to death by hanging yesterday. I’m still having a hard time finding the right words to describe the experience. Sombre? Nerve-wrecking? A closure? I don’t know. How does one even begin to describe witnessing the sancity of life being thrown out the window? To put it in a crudely, is this not premeditated state-sanctioned murder? I don’t know of any word which can ever come close to describing the gravity of that situation.

Here is how activist Rachel Zeng, who was also present in court, described the situation:

The mood was sombre. Everyone was silent, but I thought I could hear a sniffle from the row behind me. Michael’s death sentence was then passed.

For 6 years now, that was actually the first time I was present in the courtroom when an individual was sentenced to death. I am still overwhelmed by how that moment felt, but I am unable to articulate it well enough to fully describe the intensity of it all.

Along with Rachel and the family of Cheong Chun Yin, we entered Court 6C at 10am for Chun Yin’s case review. Michael’s case was heard just before that.

Watching the death sentence being passed would have brought back numerous grave memories for Chun Yin’s family as not too long ago, he too was sentenced to death. It was evident that his family could relate to the anguish of Michael’s loved ones. Michael and his family are from Sarawak and it look some time and the help of the court interpreter before his family understood what happened.

After the sentence was passed, Michael’s family was allowed 10 minutes to speak to him in private before he was escorted away.

Soon after, Chun Yin’s case review commenced. Although Michael’s case did bring back nightmares, the purpose of Chun Yin’s case review was for the exact opposite reason. As Michael made his way to death row, there was a possibility that Chun Yin may be spared. He wouldn’t be set free but the sanctity of his life was restored.

After a battle that spanned almost seven years, Chun Yin was re-sentenced to life imprisonment with 15 strokes of the cane, the minimum number of strokes under the charge. One could almost hear a collective sigh of relief from the public gallery. Chun Yin’s family, anti-death penalty activists and many who played one role or another during the seven-year battle shed tears of joy. As his father Mr Cheong wiped his tears, it was evident that he believed that justice has yet to be served in its entirety. His ultimate goal, as for many others who believe in Chun Yin’s innocence, was Chun Yin’s exoneration.

Human Rights Activist M Ravi, who has participated vigourously in the campaigns to save Chun Yin’s life, said:

Its a very sad case but glad the efforts paid off in seeing him alive. It was all grim a few years ago when I first took up this case. I never imagined that the case would have gone this far – it is very heartening.

In a matter of minutes, the atmosphere in Court 6C changed drastically. The same judge who took away Michael’s life has now, in a way, restored Chun Yin’s life. And as the sun rose last Friday, Muhammad Kadar had his last gasp of air in Changi Prison. 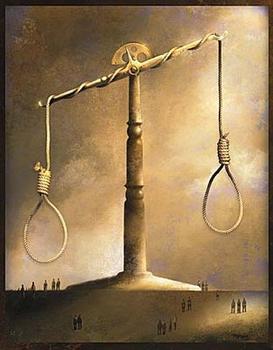 A growing number of Singaporeans, like myself, believe that the death penalty should be abolished. However, this article was not intended to discuss the effectiveness, or lack thereof, of the death penalty. I write this not with the intend of asking you to join in the abolition movement, but to, at the very least, reflect on our views on the sanctity of life.

Gandhi once argued that an eye for an eye made the whole world blind. We don’t burn the houses of arsonists and we certainly do not rape rapists.

There is also an inherent risk that errors in investigation and prosecution might be made. For many, a life for a life at the hands of a judicial system run by fallible humans may seem justified. More often than not, mistakes – even in the most diligent of judicial systems – are grave but are still reversible.

For countries that choose to retain it, the death penalty is undoubtedly the only exception. That is the risk that all of us, not just the judiciary, have to live with for this “safer society” that we so desire.

For just US$7.50 a month, sign up as a subscriber on The Online Citizen Asia (and enjoy ads-free experience on our site) to support our mission to transform TOC into an alternative mainstream press.
Tags: Cheong Chun Yindeath penaltyfeaturedMichael Anak Garing

MHA accuses British billionaire of publicly peddling falsehoods about Singapore, after invitation for live debate with minister was rejected