Sexual and physical threats made against Amos Yee

16-year old Amos Yee, who is spending the weekend in remand, is again the target of online comments which apparently advocate violence against him.

Some of these comments rather gleefully and apparently hope Amos Yee would be raped in prison.

Amos Yee has been charged for three counts by the authorities for offending the religious sentiments of Christians, for an obscene cartoon on his blog, and for causing “distress” to some who had viewed the video Amos Yee made on the death of Singapore’s former prime minister, the late Lee Kuan Yew. The charge sheet seems to say this meant Amos Yee had harassed some of those distressed by the video.

Since being arrested and charged, Amos Yee had published a blog post asking for financial help to pay his court fees.

It was after posting this blog article that the aforementioned sexually explicit comments started to be posted by some.

These, however, is not the first time that Amos Yee has been the target of such comments.

Jason Tan, who is believed to be a grassroots leader in the Telok Blangah area, had earlier posted online – in reaction to Amos Yee’s video – the following sexually explicit threat:

A letter was sent to the People’s Association (PA), which oversees all grassroots organisations in Singapore, about Mr Tan’s posting. (See here.)

There has been no response from the PA thus far.

Now, similar sexually explicit threats and “wishes” have been directed at the teenager in his blog.

These are a sampling of the comments: 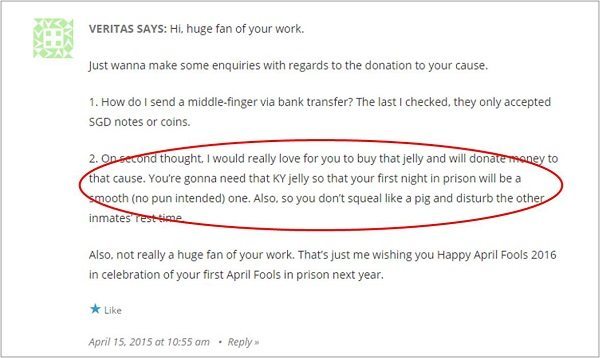 There are more than 650 comments on Amos Yee’s article.

Despite the hate-filled comments from Amos Yee’s detractors, there are also the more sensible and supportive ones which are disgusted at the threats made against Amos Yee.

Here are two of these comments: 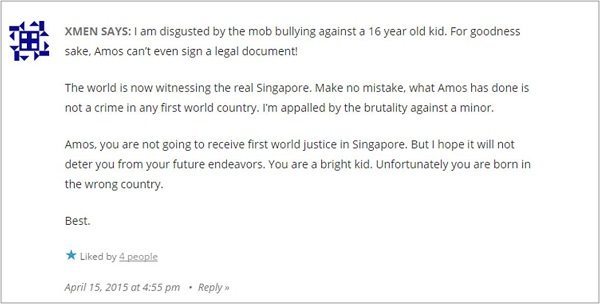 “Threatening to inflict bodily injury, property damage or damage to reputation upon another may amount to criminal intimidation under section 503 of the Penal Code.”

“Making another fearful of being hurt by you may also amount to the offence of assault under section 351 of the Penal Code.”

(i) to cause the victim to believe that unlawful violence will be used by any person against the victim or any other person; or

(ii) to provoke the use of unlawful violence by the victim or another person against any other person; or

(ii) it is likely that such violence referred to in paragraph (a)(ii) will be provoked.

It is unclear if the Attorney General’s Chambers or the Singapore police will look into the offending comments on Amos Yee’s blog.