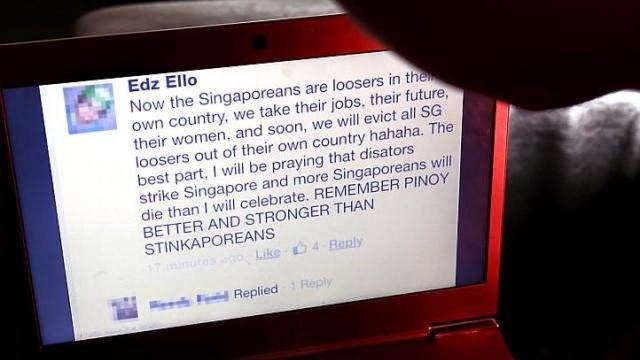 The police are still investigating the case of Filipino Ello Ed Mundsel Bello, it said in a reply to a query on the Singapore Police Force Facebook page.

Mr Ello had posted on his Facebook page sometime last year derogatory and inflammatory comments about Singapore and Singaporeans.

His posts caused such an uproar among the public that his employer, Tan Tock Seng Hospital (TTSH) fired him from his job subsequently.

In its statement on the sacking, TTSH said Mr Ello’s posts were “highly irresponsible and offensive to Singapore and religion.”

Mr Ello’s postings “have distressed members of the public and our hospital staff”, the hospital said then. “His conduct goes against our staff values of respect, professionalism, and social responsibility.”

Mr Ello had claimed that his Facebook account was “hacked” but he later confirmed to TTSH that he had indeed made the posts.

TTSH also said, “Our decision for dismissal is independent of the ongoing police investigation of the more recent alleged posts made in January 2015. We are still in full cooperation with the police on the alleged comments.”

Mr Ello’s posts were believed to have been made in 2014, and following the public uproar, an investigation by the police was commenced in January, after members of the public made police reports about it.

One of them was Mr Patrick Mahoney, who enquired with the police, through its Facebook page, on the latest status of the investigation.

“Congrats for the quick arrest of Amos Yee. Now can you guys explain WHY you STILL have NOT arrested Ed Mundsel Bello Ello aka Edz Ello when he actually did far worse things like trying to incite a communal riot and made terrorist threats against Singapore and Singaporeans? Or do we actually need to file official complaints against the police to the minister himself if we want answers?”

Amos Yee is the 16-year old teen who was arrested on Monday morning for an online video allegedly disparaging the Christian religion and the late Lee Kuan Yew.

The police have charged him under the Sedition Act and the Protection from Harassment Act.

The SPF replied to Mr Mahoney on Wednesday:

“Hi Patrick, Police investigations into the reported cases are still on-going, and it is inappropriate for us to comment further. We will provide an update once we have completed our investigations.”

“Can you please explain the reason for the delay? Many Singaporeans now believe that he has fled the country and may have returned under a false identity. And it’s definitely not a case of insufficient evidence, because my friend who made the report also provided documentary evidence including edz ello’s place of employment, telephone number and general place of residence.”

by The Online Citizen
25