The total number of work permit holders is approaching 1 million, of which one-third are construction workers: 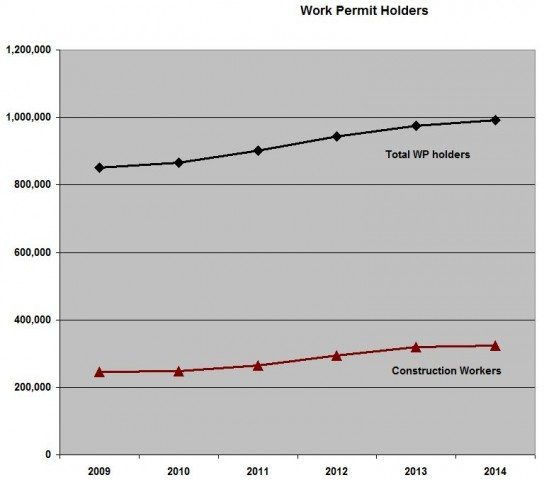 This untramelled increase has forced the Land Transport Authority (LTA) to adopt a new policy of encouraging contractors to rely more on skilled workers so as to increase productivity.

In tenders for new projects, the LTA has specified that only highly-skilled workers be employed for reinforced concrete work, for example.

The LTA is implementing the new policy with 2 contracts for the new Thomson-East Coast MRT line.

An LTA spokesman said the move was “part of the national effort to raise construction productivity and to reduce dependency on low-skilled foreign workers”.

She added, “At the same time, we aim to get industry support to raise the quality and skill level of the workforce by encouraging more workers to upgrade their skills through re-training.

“In the longer term, the improvement in the skill level of workers should translate into higher productivity, better pay and thus improve the cost efficiency of projects.”

Even after the last general election in 2011 – when the governing PAP received the lowest percentage of valid votes in the history of Singapore – the number still increased by 21% from 289,300 to 349,000, over the last 3 years. 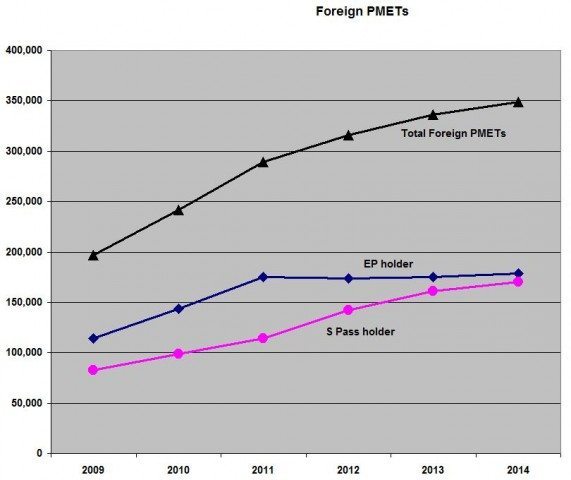 Indeed, many foreign PMETs are grateful to the Singapore government for helping them to land a job in Singapore.

At the funeral procession of Singapore’s first Prime Minister Lee Kuan Yew last Sunday (29 Mar), Kirrily Hoare, 38, an Australian expatriate who has been working in Singapore for 18 months, patiently waited by the road for Mr Lee’s hearse to pass by.

She told the media, “Nothing will deter us on this day. I am here to pay my last respects to a great man who made this possible and welcomed me to his country.”

Sadly though, more local PMETs, especially the older ones, are finding it difficult to get suitable work in Singapore. Many end up underemployed – driving a taxi or working as a security guard.

Even younger Singaporeans in the their early 30s are driving taxis, a phenomenon seldom seen in the past.

Perhaps Singaporeans should thank LTA for not giving foreigners a licence to drive taxis.

*This article was first published on TR Emeritus.