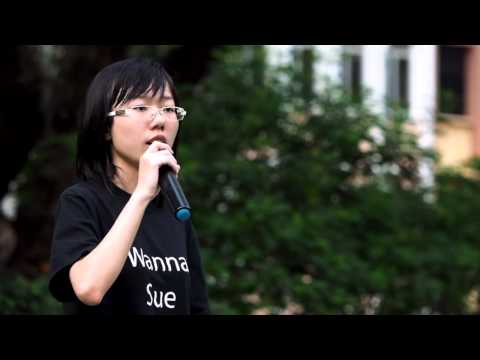 The Singapore Police has agreed to return the note book it had seized from Han Hui Hui during an interview on 10 October.
Ms Han was being interviewed as part of the police’s investigation into “an offence of unlawful assembly” on 27 September at Hong Lim Park during the fourth “Return Our CPF” protest which Ms Han had organised.
She was later reported to have been at the police interview for more than seven hours, and emerged from the police station at about 10pm that night.
Confirming the return of Ms Han’s note book, the office of her lawyer, M Ravi, said, “Police have confirmed in their letter addressed to us today [16 Oct] that they are releasing Han Hui Hui’s notebook and personally delivering the notebook to our office at 3 pm today.”


Mr Ravi had sent a letter to the police about 2 days after the police’s interview with Ms Han to demand that the authorities returned the note book to his client.
The letter by M Ravi said that Ms Han had made a written record of the questions and her answers put to her during the interview with Senior Investigation Officer, Inspector Wong Yu Wei, on 10 October 2014 at the Central Police Division.
“This personal record was prepared so that she would have accurate details of the matters in question for her legal advisers, and as such it constituted a privileged legal communication,” Mr Ravi said in his letter.
“It is a matter of the gravest concern that it appears this personal record was seized from her at the interview and had not been returned to her,” he added.
Mr Ravi’s letter also requested “an explanation for the wrongful seizure of private property from our client.”
“It is crystal clear that the police have no basis to confiscate the note book, and it was a wrongful seizure,” Mr Ravi told The Online Citizen on Thursday.
“We maintain our position that the note book is a confidential document covered by legal professional privilege,” Mr Ravi added. “It is also jealously safeguarded by litigation privilege. The notes taken by Hui Hui are meant to prepare her defence (if she should be charged for any offence). It’s time that our citizens know their rights.”
Read also: “Return Han Hui Hui’s note book – lawyer tells police“.
For just US$7.50 a month, sign up as a subscriber on The Online Citizen Asia (and enjoy ads-free experience on our site) to support our mission to transform TOC into an alternative mainstream press.
Tags: featuredhan hui huispeakers' corner