Yes, Roy should apologise, but so too some MPs

It has been three days since the controversial protest at Hong Lim Park, and the debate rages on.
Who is right, who is wrong? What actually transpired? Who said what?
It is thus important that when the dust has settled, we look at things rationally and factually with the aim of understanding what happened and how to move on and prevent future altercations or clashes.
In this spirit, we would look to all sides practising restraint, and leaders to show leadership.
And also, when wrongs are identified, they should be acknowledged, and restitution made, such as in the form of an apology.
Minister of State for Trade and Industry, Teo Ser Luck, has since asked for Mr Roy Ngerng to apologise to the children whose performance the protesters disrupted.
Mr Ngerng, on his part, has offered to meet with the children and their parents to offer a personal apology. However, the parents seem to have rebuffed his request to meet.
Such indeed is how affected many people are by the unfortunate events which were, ultimately, borne out of immaturity on the part of the protesters.
Having said that, it is also disturbing how several of our Members of Parliament (MPs) have jumped the gun and ascribed accusations to the protesters.
In particular, the protesters are being accused of heckling the special needs children who were on stage getting ready to perform their item.
The accusation seems to have been initiated by the website, called Five Stars and A Moon, a pro-Government site.
The protest event was registered by its organisers to last from 4pm to 6pm on Saturday.
At about 6.05pm, Five Stars posted a report with a rather emotive title, “Roy Ngerng and gang heckle special needs children from YMCA”.

Written by one Tay Leong Tan, the report said it was not “giving too much opinion” on the incident.
Nonetheless, it claimed that the video which it posted with the report was “a video of protestors heckling special needs children performing at the YMCA event.”
If you watch the video and listen to it, however, there isn’t anything in it to suggest that the protesters had indeed heckled the special needs children who were on stage at the time.
Still, the report by Five Stars was soon picked up by Tan Chuan Jin, Minister of Manpower, about 4 hours later.
Mr Tan said, on his Facebook page, that he was “appalled” by what the protesters had done, and described it as “vile” and a “total disgrace”.
“We now heckle special needs children?” Mr Tan asked.
Mr Tan’s post, made at 9.59pm, included a link to the Five Star report.

At 11.20pm, The Straits Times picked up the story, and also reported that the children were “heckled”.

At 11.54pm, MP fpr Choa Chu Kang GRC, Zaqy Mohamad, apparently saw the Straits Times report and joined the chorus, repeating the accusation that the protesters had heckled the children.

A little while later, in the early hours, it was Mr Zaqy’s colleague, Ang Wei Neng, who parroted the allegation, after also having read the Straits Times report apparently.
Mr Ang added an extra accusation – that besides having heckled the children, the protesters had also “[hurled] vulgarities”, even though the Straits Times report made no mention of such a thing.

About 12 hours later, it was the turn of MP for Marine Parade GRC, Tin Pei Ling, to join in the bandwagon.
In her Facebook post on Sunday afternoon, Ms Tin mentioned the word heckle/heckling/heckled 10 times in her post.

Ms Tin also posted this report from TODAY along with her Facebook post: “Ugly scenes break out at Hong Lim Park”.
The TODAY report, however, was careful in reporting the “heckling” incident.
It reported the protesters as having “allegedly heckled participants”.

And today had only used the word “heckle” once, which was in that same instance.
It seems that that was enough to cause Ms Tin to repeat it 10 times and as a fact.
MP for Pasir Ris GRC, Janil Puthucheary, while not directly mentioning the alleged heckling incident, nonetheless accused the protesters of directing bad behaviour at the children.
He apparently saw and read the report by Five Star via Mr Tan’s Facebook post.

This writer did not survey all the Facebook pages or postings of all MPs to see how many of them had helped propagate what looks like a falsehood.
But even a cursory survey throws up five MPs, including one minister, making allegations for which they have so far provided no substantiation.
There were no videos provided, or audio-recordings, or first-person eyewitness accounts.
All that seemed to have happened was the MPs read some blog post or news reports, and jumped to the conclusion that the protesters had heckled the children, or had hurled vulgarities at them, or had directed bad behaviour at the kids.
Again, no one provided any shred of evidence.
I think MPs, and especially ministers, should be mindful of their words. They must be aware that their comments and remarks will be picked up by the media and spread to a wider audience.
They must check their facts before commenting, otherwise they should choose their words very carefully when giving their views on events which have riled up deep emotions.
And yes, some of the MPs and ministers have chosen their words carefully, even as they express their disgust – rightly and justifiably – at the protesters’ deplorable antics.
Minister for Social Development and Family, Chan Chun Sing, for example, expressed dismay without hurling unfounded accusations.

So did MP for Moulmein-Kallang GRC, Denise Phua.

Perhaps the MPs who have made the unfounded accusations should emulate Workers’ Party Non-constituency MP (NCMP), Yee Jenn Jong.
Mr Yee had also initially accused the protesters of jeering at the children. However, after members of the public pointed out to him that there was no evidence to prove this, Mr Yee said he would give the protesters the benefit of the doubt.
Nonetheless, he said he still felt it was inappropriate for the protesters to disrupt the charity event.

That is how it should be – that while we express our views strongly against what we may feel is unbecoming behaviour, we 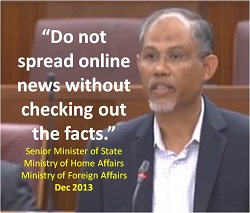 should be careful not to make unfounded allegations, especially when one is a public official.
While we demand Mr Ngerng make an apology, perhaps the MPs who made unfounded accusations should also offer their own – unless they have evidence to back up what they claim.
And incidentally, the joint-statement by NParks and the police which was issued on the day itself made no mention of any heckling incident either.
Have you subscribed to TOC? Please support our work, click here.